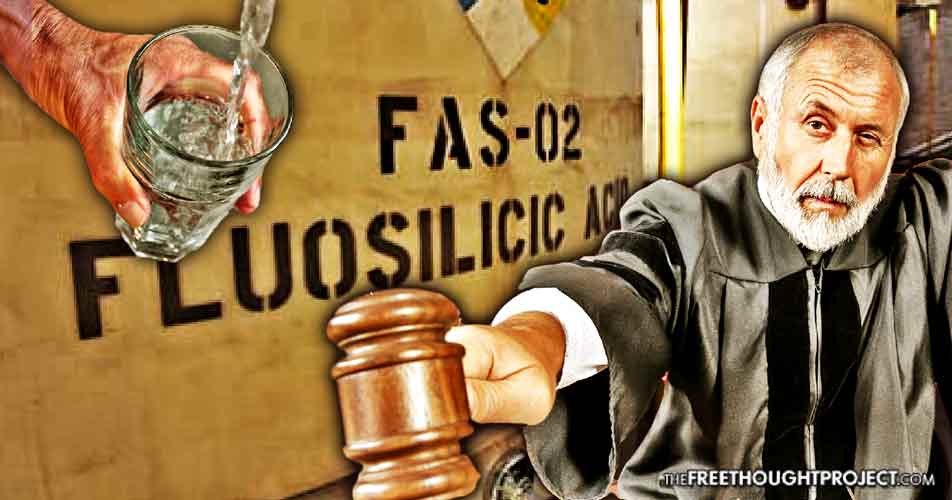 Despite the overwhelming mass of scientific literature and studies showing the harmful effects of ingesting fluoride, those who question it or advocate for the cessation of fluoridated water are labeled as kooks, conspiracy theorists, and shouted down by the mainstream. Even when the mainstream admits it — as in the case of the highly publicized Harvard Study — people remain in denial about this most horrific practice of mass medication without consent using the poisonous byproduct of fertilizer production.

However, all that appears to be changing. For the first time in US history, the courts will hear the evidence on the neurotoxicity of fluoridated water which could out an end to this practice once and for all.

Thanks to the vigilant work of the folks at the Fluoride Action Network, who’ve refused for years to be silenced, we are now witnessing an unprecedented move to stop this practice. Thousands of pages of research put together by dozens of scientists and doctors has been included in a lawsuit that could end water fluoridation in the United States.

Simply put, the evidence has reached critical mass and even the government can’t deny it.

Fluoridation, Americans are told, is necessary for the prevention of tooth decay. We must drink it and we must give our children fluoridated water in order for everyone to have a healthy smile — or so we have been advised for the last 60 years.

A whopping 43 studies have linked fluoride ingestion with a reduction in IQ. A study out of the Harvard School of public Health concluded, “children in high-fluoride areas had significantly lower IQ scores than those who lived in low-fluoride areas.”

Even more independent studies have linked the associated health risks of fluoride to interfering with the endocrine system and increasing the risk of impaired brain function. Two studies in recent years, for example, have linked fluoridation to ADHD and underactive thyroid.

Dozens more studies show the ineffectiveness of fluoride ingestion in preventing dental caries; they actually show an increase in dental fluorosis instead of a reduction in decay.

Approximately 1.2 grams of sodium fluoride will kill an adult human being. That was the low estimate that Dominic Smith ingested when he died from an overdose of fluoridated water at Hooper Bay, Alaska on May 23, 1992. Approximately 200 mg will kill a small child.

In spite of this evidence showing that the mass drugging of the American population is harmful, the CDC and the EPA maintain that it is 100% safe and that drinking the extremely deadly byproducts of fertilizer production is just fine and dandy.

It is because of the government’s continued denial and dismissal of scientific evidence that the Fluoride Action Network (FAN) has filed this landmark lawsuit.

FAN is not some ragtag group of conspiracy theorists sitting around in their basements reading fake science on the internet. The group is comprised of dozens of medical doctors, dentists, PhDs, and scientists, who’ve joined forces to bring an end to this most unethical and dangerous practice.

Stuart Cooper, FAN’s Campaign Director issued an open letter this week, noting how the “Fluoride Action Network (FAN), along with a coalition of environmental and public health groups has filed a complaint in the U.S. District Court for the Northern District of California against the U.S. Environmental Protection Agency (EPA) in response to their denial of our petition under Section 21 of the Toxic Substances Control Act (TSCA) seeking a ban on water fluoridation.

“We believe this lawsuit is an unprecedented opportunity to end the practice once and for all in the U.S., and potentially throughout the world, based on the well-documented neurotoxicity of fluoride.” You may read the official complaint here. According to FAN’s attorney and adviser, Michael Connett:

“This case will present the first time a court will consider the neurotoxicity of fluoride and the question of whether fluoridation presents an unreasonable risk under the Toxic Substances Control Act (TSCA).

And, in contrast to most other legal challenges of Agency actions, TSCA gives us the right to get the federal court to consider our evidence ‘de novo’ — meaning federal courts are to conduct their own independent review of the evidence without deference to the EPA’s judgment.”

According to FAN, the reason for the lawsuit was due to the fact that the EPA dismissed their massive cache of information submitted to them, via petition, last year.

On November 22, 2016, a coalition including FAN, Food & Water Watch, Organic Consumers Association, American Academy of Environmental Medicine, International Academy of Oral Medicine and Toxicology, Moms Against Fluoridation and several individual mothers, filed a petition calling on the EPA to ban the deliberate addition of fluoridating chemicals to the drinking water under provisions in the Toxic Substances Control Act (TSCA).

The petition includes more than 2,500 pages of scientific documentation detailing the risks of water fluoridation to human health.

We presented the FDA with a large body of human and animal evidence demonstrating that fluoride is a neurotoxin at levels now ingested by many U.S. children and vulnerable populations. We also presented the agency with evidence showing that fluoride has little benefit when swallowed and, accordingly, any risks from exposing people to fluoride chemicals in water are unnecessary.

Despite this petition, the EPA, who illustrates through this move and many others that it is beholden to special interests only and not the people, denied it.

There is now a significant consensus happening in the scientific community noting that fluoride is, indeed, neurotoxic. For the EPA to dismiss scientific facts is not only irresponsible but it is now proving to be criminal.

According to FAN, EPA’s own Guidelines for Neurotoxicity Risk Assessment highlights the importance of having a robust margin between the doses of a chemical that cause neurotoxic effects and the doses that humans receive. FAN presented the EPA with over 180 studies showing that fluoride causes neurotoxic harm (e.g., reduced IQ), pointing out that many of these studies found harm at levels within the range, or precariously close to, the levels millions of American children now receive.

Since the petition was submitted to the EPA in November and subsequently denied, more damning evidence has surfaced in the case against fluoride — and, this time, it’s from the EPA’s own scientist.

The Stars and Stripes is adopted by Congress as the Flag of the United States.

As FAN reports, some children in the U.S. may be consuming enough fluoridated water to reach doses of fluoride that have the potential to lower their IQ, according to a research team headed by William Hirzy, Ph.D., a former senior scientist at the EPA who specialized in risk assessment and published an important risk analysis in the journal Fluoride last year.

Hirzy explains the significance of this study:

One well-conducted Chinese study indicated that children exposed to 1.4 mg/day had their IQ lowered by 5 IQ points. Current average mean daily intakes among children in the United States are estimated by EPA to range from about 0.80 mg/day to 1.65 mg/day. Fluoride may be similar to lead and mercury in having no threshold below which exposures may be considered safe.”

The fight against fluoride across the globe is winning. According to FAN, millions of citizens in hundreds of municipalities throughout the world have forced their governments to stop drugging them without consent using this toxic waste. This action is working and the lawsuit is proof of its effectiveness.

For those who’d like to support the Fluoride Action Network or would like to know how you can get involved, there are some tips below. Please share this article with your friends and family to let them know that we the people are finally making progress when it comes to our health and the health of our children.