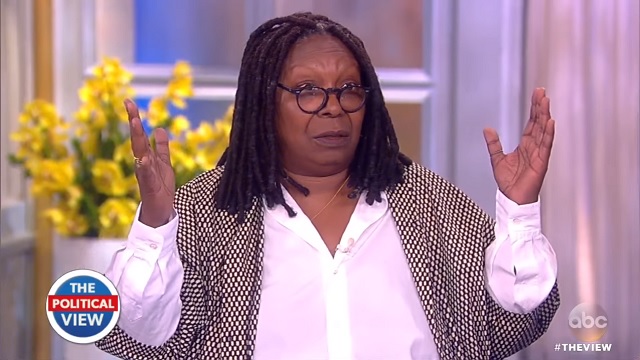 During a debate with Newt Gingrich on The View Tuesday, Whoopi Goldberg insisted Donald Trump got 98% positive media coverage during the election.

Asked to make sense of Trump’s low approval ratings, Newt Gingrich brought up a recent study from Harvard which found CNN had 93% negative coverage in Trump’s first 100 days in office and said it’s “a miracle that Trump has any approval” in such a hostile media environment.

Goldberg responded by insisting repeatedly that from the moment Trump “came down the escalator until the time he won, he was 24/7 on every television” and “it was all positive,” to the tune of “98%.”

BEHAR: I have a question, too.

WHOOPI: So, do you mean, because I recall and maybe I’m crazy, but I recall from the time the gentleman came down the escalator until the time he won, he was 24/7 on every television on every network forcing– making one of the head of the networks saying, ‘yeah, it wasn’t good for America but it was great for us.’ It was all positive until people started asking questions. Now —

GINGRICH: It wasn’t all positive!

SUNNY HOSTIN: It was live coverage of Donald Trump was saying.

GINGRICH: It was all noisy but it wasn’t all positive.

BILA: No, I disagree with that…

WHOOPIE [to Bila]: I know you disagree with it but I don’t care. I know what I saw. [throws hands up in the air]

This is what Hollywood liberals actually believe.