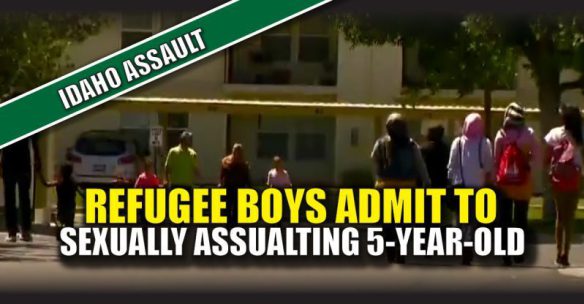 Talk about an injustice. As we have seen in Islamic cultures, if a woman is raped, and married, she is the one guilty of a crime. Often she faces imprisonment such as in the story of Australian Alicia Gali or a similar story that happened to Norwegian Marte Deborah Dalelven or a female British tourist. Now, it’s coming to America as Muslim migrants who sexually assaulted a 5-year-old girl are given probation in Idaho.

A judge sentenced three Muslim refugee boys in the sexual assault of a 5-year-old girl in Idaho, but nobody knows the length or terms of the sentence because the judge has barred everyone in the courtroom, including the victim’s own parents, from speaking about the case.

The three boys — two from Iraq ages 7 and 10, and one from Sudan aged 14 — pleaded guilty in juvenile court in April to multiple counts of sex crimes in an incident that occurred last June in Twin Falls. The assault occurred at Fawnbrook Apartments, when 5-year-old Jayla, who is developmentally disabled, was lured into a laundry room, stripped of her clothing and sexually assaulted while the oldest boy filmed the entire incident.

Now, following a sentencing hearing Monday at the Snake River Juvenile Detention Center in Twin Falls, Judge Thomas Borresen of Idaho’s 5th Judicial District issued a gag order preventing everyone in the courtroom from saying anything about the sentence received by the boys.

Borresen did allow the family to say they were unhappy with the sentencing, but threatened to jail them for contempt of court if they say why they are unhappy.

A gag order? Has the judge not heard of the First Amendment? Where does he get the authority to gag people concerning this crime and the sentencing?

According to the Idaho Statesman:

Three boys, ages 14, 10, and 7, were charged in the case. The older boys, brothers, are from Eritrea, an African country, while the younger boy is from Iraq. The boys are from refugee families, but it is unclear how long they had been in the community.

What is known is that one of the boys touched the girl inappropriately inside the apartment complex’s laundry facilities. Another boy recorded the assault on a phone.

In commenting on what took place, Pamela Geller took to Facebook to inform followers of the gross injustice in the case, and says the family of the little girl said the boys simply got probation.

The mother of the victim setup a GoFundMe page to help with expenses. She writes:

I am the mother of the victim, a little 5 year old girl, who was sexually assaulted by 3 Sudanese and Iraqi refugee children in June 2016. They have pleaded guilty to the crimes they have commited. This gofundme was first made by a friend to help us get some assistance. We were not receiving any assistance when we were forced to move to a hotel for 2 months, before moving to a more expensive area.

This gofundme will help our family with financial burdens accumulating since this crime against our child occurred. It will also help with counseling, medical costs, and lawyer fees as they arise. We want to thank everyone so much from the bottom of our hearts for all the support you have and continue to provide for our family. We will heal, but it will take time. We appreciate everyone and will continue to update as much as we can. But it is a sealed case, so it is hard to tell everything. We can only post what we are allowed to post. Thank you for understanding and GOD bless.

If you have questions, feel free to email me at

So far, the page has raised almost $100,000 since being started last June by Lacy Peterson.

For more on this story: