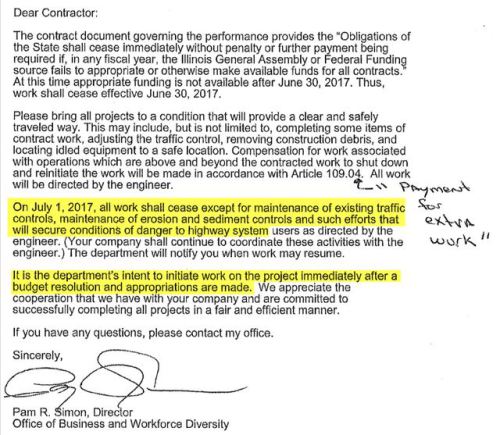 The state of Illinois is broke, so broke that the state government sent a notice to contractors that beginning July 1, they are to halt all road work, except what is needed for safety.

Investment adviser Mike “Mish” Shedlock of Mish Talk reports that after years of over-spending and a very business unfriendly environment, the state of Illinois is in dire financial straits. The state government has not passed a budget for close to three years, its unpaid bills are a whopping $14.3 billion, and Moody’s has downgraded its bond rating, with five Illinois universities rated junk.

Below is a screenshot of the letter sent to contractors by Pam R. Simon, Director of Illinois’ Office of Business and Workforce Diversity, stating that:

On July 1, 2017, all work shall cease except for maintenance of existing traffic controls, maintenance of erosion and sediment controls and such efforts that will secure conditions of danger to highway system users as directed by the engineer.”

The parlous state of Illinois’ finances can be seen in its universities and the state’s economic activity:

Illinois’ answer to its financial insolvency is to raise taxes. But it took $31.6 billion of new tax revenue to reduce the backlog of bills by only $1.3 billion. At the same time, the state’s pension debt got worse, increasing by more than $25B from 2010 through 2015.

The result: Illinois is now called a failed state by Politico, the Heritage Foundation, and the Chicago Tribune.

Illinois is a Democratic stronghold and considered one of the most Democratic states in the nation, as you can see in the posts FOTM has published: