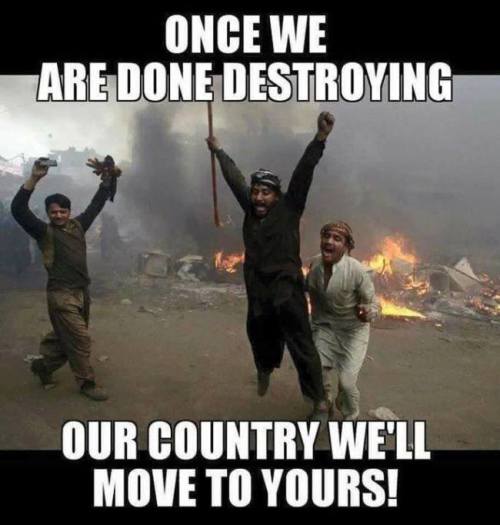 Tuesday, the European Union (EU,) in a press release from its executive cabinet, the European Commission, announced that the EU is “launching infringement procedures” against three member states — Czech Republic, Hungary and Poland — for shirking their “obligation” by refusing to take in refugees (“that have not yet relocated a single person, or that are not pledging to relocate”).

At the same time, the European Commission declares the refugee “resettlement” of the past two years to be a success (“relocation works if there is political will”) and that the “relocation” will “accelerate”. In fact, the pace of refugee intake “has significantly increased in 2017 with almost 10,300 persons relocated since January — a fivefold increase compared to the same period in 2016.”

The EU elites won’t tell their peoples the truth, but Professor Abdessamad Belhaja, a highly-regarded scholar of Islam, has.

Dr. Belhaja explains that although Muslims claim it to be just and virtuous, the “Islamic moral economy is the sanctification by Islam” of a self-serving economic model wherein “every act, violent or moderate, and transaction, legal or illegal, serves as a tool to spread Islam, support and maintain the Muslim community.”

“Islamic moral economy believes that if there is money, it is because of Islam, and if there is Islam it will bring money because of the constant redistribution of the goods. In Islam, all property belongs to God [Allah], and when he gives it to people, he expects a deal: that of spending it in ‘the way of Allah’. Islamic law urges to use every property in the service of religion. Property is regulated by sharia, the only valid law from an Islamic point of view. The faithful [Muslims] considers all property as ‘given’ and not ‘acquired’ by work. So, the more property a person has, the more it feels she or he should give it back to God, that is to mosques, call to Islam, pilgrimage, supporting jihad, etc. If a person acquires property and does not redistribute it, religion and society will activate a discourse of guilt . . . [and] threatens anybody who does not contribute to it.”

And that’s exactly what the Arabic countries do with their income from oil trade — they “give it back” to Allah by constructing mosques and spreading Islam:

“oil allowed countries such as Saudi Arabia and Iran to re-Islamise migrants in Europe, and Muslim societies from Africa to South East Asia. This income was sold as a divine grace, to disseminate conservative and political Islam, the results of which we see today in the spread of Salafism and political Shiism…. Islamic charities are usually led by Islamists, mainly Muslim Brotherhood affiliates, with international webs from Indonesia to the United States. They practice missionary work, while funding Hamas, and other Islamic projects controlled by Islamists . . . in Europe and elsewhere.”

In the case of Muslim “refugees” and “migrants” in Europe, that means they regard Europeans’ property as Islam’s for Muslims to take. Belhaja warns that the Islamic socialist conception of economy is “disastrous” for the “market economy” of capitalism and will lead to the impoverishment of the West’s middle class:

“This moral economy appears as a blessed subsistence, rizq that you get with no specific reason . . . . This redistributive system allows surviving on the periphery even without having a job for 30 years while having as many kids as possible . . . .

In Islamic discourses, migration is seen as a beginning of the Islamisation of Europe, the rich land that will change the fate of Islam, from a religion of the poor to a religion of the rich. This is of course a paradox since the poor can only make Europe poorer . . . . The reason Islamic moral economy is disastrous is that it . . . increases the number of the community through demography, converting and migration, exhausts resources and moves on . . . . This results in weakening further the state and the middle classes . . . .”

At the same time, Muslims in Europe do not recognize the legitimacy of European states and their laws because for Muslims:

“state law has no weight compared to the law of God [Allah] . . . . Often, Islamists accept state law as a parallel law, to establish a parallel society. Islamists today defend secularism in Europe because in the current form of secularism, parallel economy is possible.”

The question naturally arises: Why, then, do Western governments support and encourage the migration and resettlement of Muslim “refugees” in Europe and North America?

Dr. Belhaja states that the Left and Islam share affinities that are structural, not accidental. For the Muslim migrants, the West is a source of welfare. For Western political elites, the benefits include:

(a) Votes, in exchange for welfare:

“Socialist and social democratic parties also played a major role in this gift economy: they gave Muslim families social assistance, in exchange of votes, and then supported the construction of mosques and the spread of Islamism, etc. It is an alliance that, at the end of the day, discourages Muslims from integration, citizenship and work.”

(b) A minimum-wage immigrant workforce with “an impulse” for consumerism, which is the opiate used by the state to control the masses.

“Migration is useful for the neo-liberal model of the borderless, minimal, global society, but is calamitous for the European citizens as a whole. The millions of migrants neoliberalism welcomes appear as a cheap work force; it believes that the expenses spent on them will pay back by lower salaries, etc.. In the meantime, European citizens get poorer since average wages are decreasing, and unemployment is on the rise. The logic of neoliberalism only looks at the profit it could get from Muslim migration.”

Dr. Belhaja predicts that the inevitable result of Muslim migration to the West is jihadism, when the migrants discover they cannot achieve material prosperity and turn to religious and political radicalism. He explains:

“Islamic movements and the migration waves provide examples of how MacWorld attracts jihad. On the one hand they yearn for the living standards of the West. On the other hand, as shown by the crisis of the second and third generation of immigrants, they cannot obtain what they desire. This failure, ineptness and exclusion generate aggression. Jihadism sustains a religious narrative – an apocalyptic one I would say – stressing the need to demolish the “pagan” West and bring Islam to victory. However, in fact it serves economic interests, usually of international dimension, while it provides false feeling of religious self-realisation. Generating fear strengthens the Islamic moral economy, as it proves to its adherents the moral superiority of Islam, and prepares for its long awaited victory.