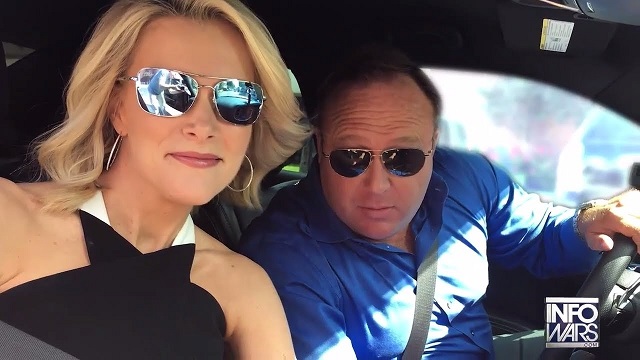 Friday morning Alex Jones released secretly recorded audio of Megyn Kelly during their pre-interview together where she swears up and down their interview is not going to be a “hit piece” and even promises she’ll allow his team to review all the clips they use to make sure he’s not taken out of context.

Jones says he “knew it was all crap” and that’s why he decided to record all their interactions. Sure enough, rather than cover Jones as a multifaceted human being as promised, the preview clip NBC released was entirely about Sandy Hook and it came out Wednesday NBC re-edited the interview to be even “tougher” on Jones.

“In the past NBC could manipulate and lie, they were the gods,” Jones says. “Megyn Kelly waltzed in here and told me she was going to do a softball interview with Alex Jones…she did the opposite of what she said. We were recording the whole time. These tyrants haven’t figured it out yet, that information warfare is a two-way street.”

Here’s some of the highlights of Kelly’s statements as transcribed by The Daily Beast:

“My goal is for your listeners and the left — you know, who will be watching some on NBC — to say, ‘Wow, that’s really interesting, It’s not going to be some gotcha hit piece, I promise you that.”

…“The reason you are interesting to me is because I followed your custody case and I think you had a very good point about the way the media was covering it. And for some reason they treated you and your family as fair game, and they never would have done that [to a] mainstream media figure.

…“I saw a different side of you and you became very fascinating to me. Your comments during the trial just reminded me you are just like anybody and I thought that would be an interesting story to tell.”

It is Jones who brings up the issue of Sandy Hook, and Kelly replies, “I can ask you about that,” but promised him “it’s not going to be a gotcha hit piece.”

…Kelly later says: “It really will be about who is that guy. I’ll ask you about some of the controversy and I‘ll ask you and you can respond…If there’s one thing about me, I do what I say I am gonna do. I don’t double-cross.”

At another point she says, “I’m not looking to portray you as some kind of boogeyman. The craziest thing of all would be if some people who have this insane version of you in their heads came away saying, ‘You know what? I see the dad in him. I see the guy who loves those kids and is more complex than we have been led to believe.’”

Probably the most awkward clip for Kelly will be when she tells Jones: “I will personally promise to look at any clips we want to use of you, and have a producer run by you, whether we are taking it in context, what you are saying.”

…In another section Kelly says: “I’ll give you the chance to respond, I really just want to talk about you. You. Take the measure of the man. This is your chance to tell people who you are.”

Kelly also promises Jones: “If I ask you about any controversy, you’ll have the chance to address it fully. We won’t cut you in a way that is going to take out the heart of your explanation or the real substance of it.”

God forbid the MSM actually gives Jones a fair shake. Fortunately, this is all blowing up in their faces. Everyone should secretly record their interviews “Trump-style,” there’s nothing more interesting than seeing how the media blatantly lies.