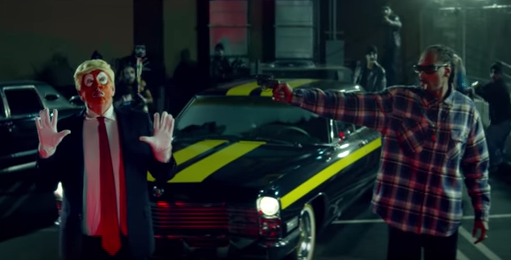 The shooter, Hodgkinson, is dead. Rep. Steve Scalise of Louisiana, a congressional staffer, a lobbyist, and a US Capitol policeman were wounded. Without the presence of Scalise’s Capitol Police security detail, there would have been a massacre of Republican congressmen.

Kathy Griffin holds the blood-soaked decapitated head of Trump. Just a joke. Snoop Dogg releases a music video in which he shoots a toy gun at a clown dressed as Trump. Just satire. The prestigious Public Theater in New York City stages Shakespeare’s Julius Caesar with a Caesar who looks like Trump, who is assassinated. Artistic commentary. Comedian Sarah Silverman tweets, “WAKE UP & JOIN THE RESISTANCE. ONCE THE MILITARY IS W US FASCISTS GET OVERTHROWN. MAD KING [Trump] & HIS HANDLERS GO BYE BYE.” Satire. Madonna tells the Women’s March she’s thought a great deal about blowing up the White House. But she knows “this won’t change anything. We cannot fall into despair.” An Oprah moment. Rapper Little Bow Wow tweets to Trump, “Shut your punk ass up talking shit about my uncle [Snoop Dogg] before we pimp your wife and make her work for us.” Brief frustration.

Of course. And these are the people who want “social justice.” Equality for all. Free everything for everybody. Utopia. Or something.

These are the people who think of themselves of rebels, while they actually work for elite Globalism and its agenda of planetary government and planetary corporate control.

These celebs are clueless.

Chaos and destruction are a phase in the openly planned Globalist takeover. But understanding this is too complex for their simple minds. Following a sequence of thought from A to B to C is impossible.

They think they’re “overthrowing the power.” But they’re just adding to that power.

On the issue of open borders and unlimited immigration, for example, they’re a million miles from realizing the true Globalist intent.

In 1969, four years before co-founding the Trilateral Commission with David Rockefeller and launching an eventual capture of the White House under their created president, Jimmy Carter, Zbigniew Brzezinski wrote:

“[The] nation state as a fundamental unit of man’s organized life has ceased to be the principal creative force. International banks and multinational corporations are acting and planning in terms that are far in advance of the political concepts of the nation state.”

The question was: how could nation states be eradicated? And one of those answers is: open borders, unlimited immigration. Change the face of nations. Wipe out all local traditions. Radically alter demographics. Make separate nations an extinct concept.

Of course, a cover story was necessary. It was, and is, humanitarian share-and-care. “We must let everybody in and embrace them.”

And another aspect of the cover story—foment wars to create displaced populations who would flee to the West. However, many of the immigrants aren’t, in fact, fleeing from war. They’re young military-age fighting men who arrive in the West with an appetite for destruction. More chaos in the works.

This is the op.

But the chance of celebrities catching on to this—and speaking out against it, in the age of political correctness—is zero.

Back in February, in the wake of the Berkeley, California, street riots, I wrote: “In the early days of the American Republic, George Washington warned against entangling foreign alliances. Flash forward from 1796 to 2017. Last night, masked thugs emerged from a crowed of protestors, at UC Berkeley, and chanted: ‘No borders, no nations, fuck deportations.’ And there you have it. A PERFECT summary of the Globalist position. One planetary nation (under one gentle, all-inclusive, loving, iron fist). George Soros would be smiling. David Rockefeller would be chortling.”

The presence of Donald Trump in the White House provides the ideal opportunity for unconscious Globalist foot soldiers to ramp up violence, blame it all on Trump, and bring about a major course correction—back to a Globalism much more severe than anything Trump would support—back to Globalism with a vengeance—calling it humane, calling it love, calling it caring, calling it freedom, calling it equality.

The current idiot’s delight education system makes it easy for the young to avoid thinking from A to B. No need to figure out what is going on. Just wave the correct banner, throw a brick through a store window, set a car on fire, and demand “social justice.” Then pause for a moment and admire the work of a 66-year-old socialist, who tried to wipe out Congressmen on a baseball field. As if that was a contribution toward the making of a better world.

Throw your mind in a garbage can. No need to have it or use it.