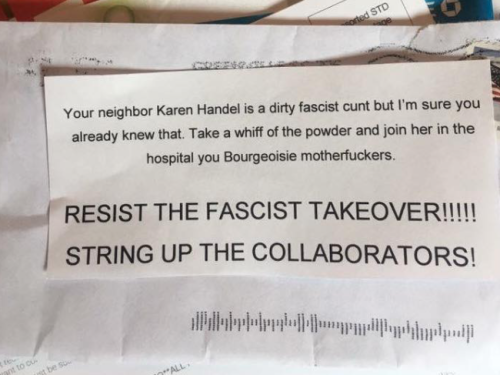 After the defeat of Hillary Clinton in last year’s presidential election, the Left are taking America’s decades-old “culture war” to a hot war of actual acts of violence and terrorism.

Both before and after President Trump was inaugurated, the Left poured on their hate and death threats. See:

But their targets aren’t just Trump and his family. It’s now open season on the Right — Trump supporters, Republicans, AltRight and conservatives:

(1) Last Tuesday, June 13, 2017, shots were fired at a truck carrying a “Make America Great Again” flag and an American flag on eastbound I-465 in Indiana.

Fox59 reports that officers believe the shots were fired from a newer white 4-door Chevrolet Malibu with a Louisiana plate near Emerson Avenue around 4 p.m. The victim and a witness informed police that the Malibu pulled up next to the pickup truck, a passenger held a handgun out of the window and then a male fired several shots. Fortunately, no one was injured in the incident.

The driver of the Malibu is described as a black male around the age of 23; the passenger is a light skinned black male with a sleeve tattoo on his right arm. Indiana state police are asking anyone who may have witnessed the shooting to call 317-899-8577.

Karen Handel is the former Secretary of State of Georgia (2007-2010) who is currently a candidate for Georgia’s 6th Congressional District Special Election.

Washington Free Beacon reports that police blocked off Georgia Republican Karen Handel’s neighborhood after threatening letters containing a white powdery substance were left in the mailboxes of Handel and her neighbors.

A neighborhood resident posted a picture (see below) of the contents of the envelope she received, including a threatening letter in graphic language, saying:

“Your neighbor Karen Handel is a dirty fascist cunt but I’m sure you already knew that. Take a whiff of the powder and join her in the hospital you Bourgeoisie motherfuckers. RESIST THE FASCIST TAKEOVER!!!! STRING UP THE COLLABORATORS!”

“Republican Bitch Wants People to Work for Slave Wages, when a Livable Wage is the Only Way to Go! Vote Blue, It’s Right for You!”

(3) Antifa post guidelines on how to spike pet treats with sharp objects and scatter them in conservative neighborhoods.

American Renaissance has put together an anti-Trump hate map showing the Left’s growing violence against the Right — criminal incidents in which Trump supporters were targeted for political reasons. Each marker on the map shows the location of an anti-Trump hate crime: Red markers signify violent crimes; blue markers, property crimes; purple markers, “other” crimes.

The above shows that the Left are actively fomenting a civil war, which will happen when the Right have had enough and decide to push back.

As with Muslims, where are the voices of “moderate” Democrats/Progressives condemning the Left’s hate rhetoric and acts of violence? Where are the denunciations from Democrat leaders Hillary Clinton, Barack Obama, Nancy Pelosi, et al.?

See also these other posts on the Left’s hate rhetoric and violence:

See “Conservative Blogger Found Guilty on 21 Counts for Self-Defense with a Firearm, Faces up to 50 Years in Prison” for what happened to a conservative, Michael Strickland, who fought back.

Handel is running neck-to-neck (47% vs. 47%) against Democrat Ossoff in Georgia’s Special House Election. Donate to her campaign here.