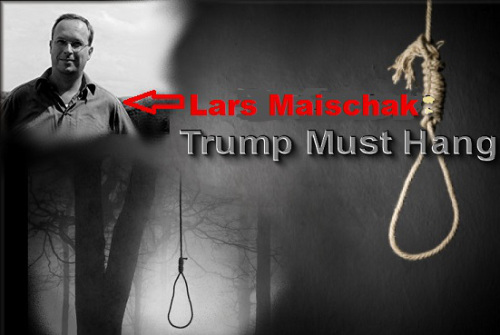 More terrorism from the Left.

Lars Maischak is a lecturer (which means he’s a temporary hire, and not a “ladder” faculty on track toward tenure) in the History department at California State University, Fresno.

As reported by The Daily Caller, in a series of vicious tweets, Maischak compares Trump to Hitler and calls for the hanging of President Trump, the execution of two Republicans for every illegal immigrant who’s deported, and the banning of the Republican Party — all of which Maischak justifies as “saving democracy”. (Note: Maischak has since deleted his tweets and his Twitter account)

“To save American democracy, Trump must hang. The sooner and the higher, the better. #TheResistance #DeathToFascism.”

“Has anyone started soliciting money and design drafts for a monument honoring the Trump assassin, yet?”

“#TheResistance #ethniccleansing Justice = The execution of two Republicans for each deported immigrant.”

“Mercy towards racists was always the fatal weakness of good Americans. 1865, 1965, they left too many of them alive.”

“#TheResistance A democracy must not be tolerant of those who want to abolish democracy. It must vigorously defend itself. Ban the @GOP.”

The blatantly biased Cory James — who archly calls Breitbart News “far-right” but neglects to characterize Maischak with any adjective, such as the fitting label “far left” — reports for Fresno’s ABC30 that after “far-right” Breitbart called attention to Maischak’s “hang Trump” tweet, Maischak said he does not condone violence and defended his tweet by claiming it had been taken out of context and doing a Bill Clinton on the meaning of the word “must”:

“At the moment, based on my conviction that a majority of Americans are committed to Democracy, it, therefore, follows that ‘Trump must hang…,’ with the word ‘must,’ expressing a logical necessity rather than a demand or wish.”

“Fresno State understands the deep concerns that have been shared as a result of personal comments made by Professor Lars Maischak, who is a lecturer in the History Department at Fresno State. In response to these concerns, we have conducted a preliminary review to ensure that it is clear that the statements made by him were as a private citizen, not as a representative of Fresno State. Professor Maischak’s personal views and commentary, with its inclusion of violent and threatening language, is obviously inconsistent with the core values of our University.

Our primary concern is for the safety of our students and with providing a conducive learning environment. We acknowledge that our faculty have an obligation to establish and maintain ethical and professional conduct, inside and outside of the classroom.

While Fresno State is committed to state and federal constitutional rights of free speech, the content of statements by Dr. Maischak warrants further review and consideration. The review of these and any other statements will be conducted in the context of rights of free expression, but also for potential direct threats of violence that may violate the law.

The University is taking this matter seriously and handling it in accordance with applicable law and policy, as well as our traditions of academic freedom and the requirements of the faculty collective bargaining unit agreement. The University will fully cooperate with any investigations conducted by Federal officials.”

Reportedly, Maischak has been put on paid leave. As you can see by going here, Maischak is still listed as a History lecturer at Cal State Fresno.

Here’s contact info. for you to register your objection and call for the firing of Maischak. This man has no business teaching America’s youth:

Lars Maischak is not only a terrorist, he’s also an utter failure as an academic, being 48 years old and just a temp lecturer. There are 48-year-old academics who are tenured full professors.

See also “The Left are trying to start a civil war“.