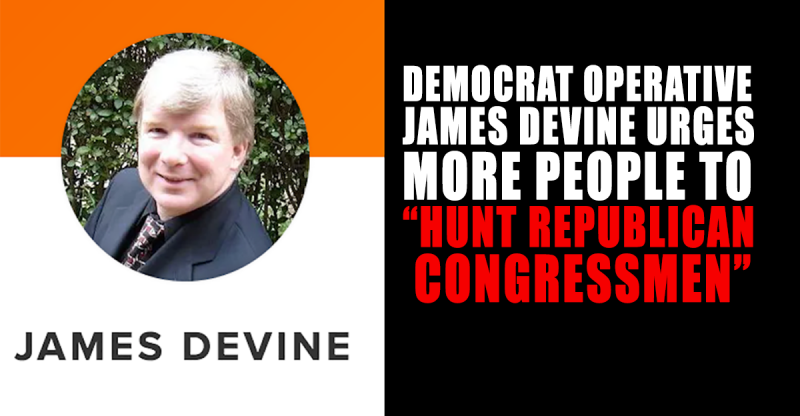 Editor’s Note: Keep in mind these are the same people advancing their agenda to take your guns.

If you think that it’s only the “fringe” liberals who were happy to hear of the attempted GOP massacre in Arlington, Virginia on Wednesday, you’d be wrong.

In the hours after the attack, we saw social media exulting in the attack with thousands of liberals making comments that range from saying that the GOP “deserves” the violence, to happiness that someone “finally” did something. I’m not kidding – read here, here, here, and here.

There has also been an uptick in threats made toward Republican leaders across the country. (See here, here, and here.)

Celebrities have been getting in on the act too: See for yourself here, and here.

Sadly, it’s not just the crazies who are threatening the violence. Think about all of the protesting and violent rioting that we’ve witnessed in recent months. This isn’t just one or two people on the fringe engaging in psychotic behavior. We have seen groups of tens, and hundreds violently demonstrating in communities across the nation, from Oregon, to Wisconsin, to New York. The violent anger percolating just under the liberal surface is palpable, it’s as if we can feel the heat rising from the seething masses of liberal activists… and that anger could explode at any second.

Even supposedly “normal” liberal leaders like Orange County, California’s Jeff LeTourneau seem ready to violently respond to the next conservative they run across.

Or how about this Democrat Party operative from Union County, New Jersey who, speaking about the mass shooting in Alexandria, told his Democrat friends that it was time to #HuntRepublicans? James Devine has been working in New Jersey politics for a very long time but his recent posts on Facebook and Twitter are earning him the most attention he’s ever received.

In the wake of the shooting in Alexandria, Devine took to Facebook where he wrote:

“I have little sympathy for the Republican Congressman who got shot today because he viciously opposed President Obama’s effort to reduce gun violence and instead, he accepted more gun lobby money than all but 15 other members of the House of Representatives.”

He also attacked the victim, Congressman Steve Scalise (R-LA) by implying that Scalise got what he deserved because he spoke to racists.

To be clear – Scalise did NOT know that he was speaking to a racist organization. He was told that it was a group of Louisiana business leaders, not that it was a David Duke tied racist organization. This slanderous lie that Devine tells has been debunked so many times that it’s ridiculous that he even brings it up, let alone that he uses it as some kind of vindication of the attempted assassin.

Devine has faced a lot of pushback since posting these comments but he told a New Jersey radio station that he’s not apologizing and that he meant every word.

“It is insensitive and I don’t care. You want me to be politically correct? I don’t have time for that anymore.

I’m not apologizing if it offended snowflake Republicans.”

In fact, while not apologizing, Devine actually argues that Republicans brought the attack (and possibly more attacks to come) on themselves, by defending the Constitution. Yes, Devine connected his commentary to Senator Rand Paul (R-KY) arguing that the 2nd Amendment was about citizens defending themselves from a tyrannical government. He then said that the Republican agenda of smaller government (non-socialist healthcare, voter ID laws, and fewer gun control laws) was his idea of “tyranny.” Yes, the ignorant fool tried to argue that less government control was TYRANNY!

But he doesn’t want people to think he was advocating violence, by saying HUNT REPUBLICANS just hours after a madman tried to shoot a bunch of them with a rifle. No, he was only trying to be shocking.

“I abhor all political violence. It has no place in our American democracy. And my prayers go out to the congressman, to the police officers and the other people who were wounded. It was a terrible, terrible tragedy, as are all senseless acts of violence.”

Rahway, NJ Republican Chairman Patrick Cassio may have had the most insightful thoughts about Devine’s horrific comments, “This could have been a massacre and this nut is going to say that?” Cassio also added that Devine “is saying is no different than what the shooter was saying.” Exactly.

In fact, this is the point, isn’t it? The things that the Alexandria, Virginia shooter was saying are the same exact things that many Democrat pundits are saying on TV every day. They call Trump a fascist. They say the GOP is destroying the Republic. They argue that Trump and Republicans are an existential threat to the future of America. If Democrats really believe that, like Devine and the Arlington shooter, then, of course, they’re going to get violent. Of course, they’re going to start killing us.

The Democrat Party needs to wake up.

Donald Trump is a moderate Republican (who’s actually got some pretty liberal ideas), and the federal government is still operating as it should. The Judiciary is independent, the legislature has intense debate, and President Trump has done nothing to cause the kind of “sky is falling” rhetoric that we are seeing on the left.

There is no reason for liberals to be this angry.