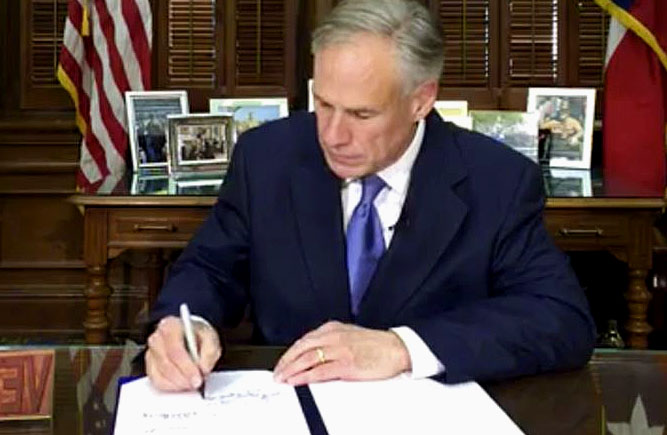 On Wednesday, Texas Governor Greg Abbott signed into law House Bill 45, the “American Laws for American Courts,” which prohibits the state’s courts from using any foreign law in its courts, with specific reference to family courts that involved marriage or parents and children.

The bill, which had five sponsors and twenty-six cosponsors (all Republican), passed the House at the beginning of May and the Senate near the end of May.

Representative Jeff Leach (R-Plano) thanked Abbott and said the bill was a “vitally important bill to further safeguard and protect our Constitutional rights!”

Thank you Governor Abbott for signing our House Bill 45 – a vitally important bill to further safeguard and protect our Constitutional rights!

Leach previously introduced a similar bill in the last legislative session, House Bill 562, but it did not successfully pass.

Representative Dan Flynn (R-Canton) was the lead author on the bill. He, too, had introduced unsuccessful legislation that was similar to HB 45 in the past.

While many people commented that the law was frivolous, and to be honest if the courts stuck to American law and didn’t stray from that, they would be correct, Flynn noted that is was not so.

Flynn said that foreign law was being applied in Texas courts concerning a variety of things such as divorce orders, child support, property settlements and sometimes even, spouses enter into agreements to have foreign law applied to their disputes, according to Breitbart.

“My colleagues and I here at the Texas Legislature want to make sure Texas judges never apply foreign law in Texas courts in violation of constitutional rights and the public policy of our state,” said Flynn.

Under HB 45, Texas and U.S. law supersede all other laws. It prevents state judges from applying any foreign law because, in doing so, it infringes upon U.S. and Texas constitutional rights. The bill shields litigants in family law cases “against violations of constitutional rights and public policy in the application of foreign law” under the U.S. and Texas Constitutions, federal and judicial precedent, the Texas Family Code, and the Uniform Child Custody Jurisdiction and Enforcement Act, among other protections.

HB 45 makes no mention of any particular foreign nation, religion, or cultural practice but clarifies that “foreign law” means a rule, law, or code from a jurisdiction outside of the United States and it shall not override U.S and Texas law or their respective constitutions. It specifies that a “foreign judgment” means a ruling from a court, tribunal, or administrative adjudicator outside U.S. states and territories. The bill underscores that, in the event of any legal conflicts, “federal or state law prevails.”

If you recall, a Sharia tribunal was set up in Texas back in 2015 to deal with some of the family issues under Sharia. They immediately found themselves in trouble with the law for making false claims about those who were a part of the tribunal.

When similar legislation came out in 2015 to deal with this issue, Muslims stormed the Irving City Council and were outraged that the bill would ban Islamic Sharia Law Tribunals.

As the outrage of the Muslim community grew, Irving Mayor Beth Van Duyne said that she was “not going to be bullied,” and would “not be deterred.” Behind those attacks on Van Duyne and others was none other that designated terror group and Hamas-tied Council on American-Islamic Relations (CAIR).

Later that same year, the story broke about Ahmed “the fake clock making boy” Mohamed, which occurred in Irving. The previous year, Barack Hussein Obama Soetoro Sobarkah’s former national security adviser and Muslim Brotherhood supporting imam, Mohamed Elibiary, left the administration to work in nearby Dallas at his Freedom & Justice Foundation. This all occurred as an influx of illegal aliens poured across America’s southern border, some of whom we suspect were Islamic jihadis due to previous reports here, here, here, here and here.

There is no doubt that Sharia is being pushed to replace the US Constitution among many Islamists. Even Elibiary has said, “The United States of America an Islamic country with an Islamically compliant constitution.” To make matters word, Herman Mustafa Carroll, executive director of the Dallas-Fort Worth CAIR branch declared openly, “If we are practicing Muslims, we are above the law of the land.”

Sadly, because America has abandoned God and claimed that all gods are equal and allowed the public worship of those gods in the public square, she is reaping the fruit of her idolatry. While I am glad that the law was passed and that people recognize there is a problem there, in my opinion, they are simply applying a band-aid to a gaping wound. We must get back to the principles that established us as a city on a hill in the world and to do that, we must go back to the Bible and the Law of God.