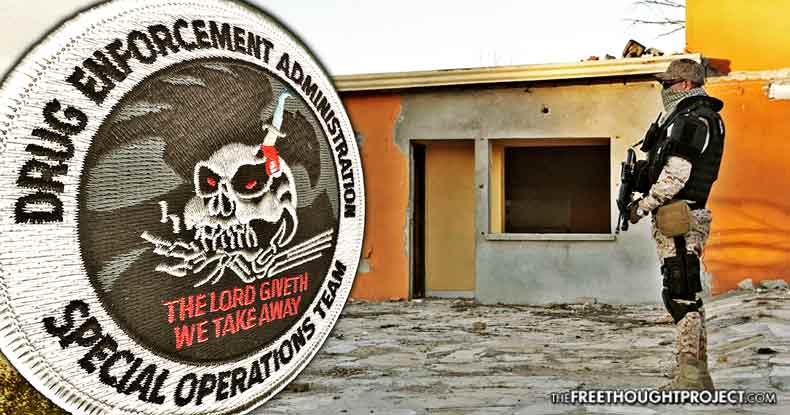 The 2011 massacre carried out by the Zetas drug cartel in Allende, Mexico was a shocking reminder of the brutality of the black market, which thrives under governmental drug prohibition. The war on drugs does nothing to actually reduce drug supply or consumption, but it does keep the police state and cartels thriving, perhaps most notably the U.S. Drug Enforcement Administration (DEA).

While stealing property from innocent people and ruining lives in the homeland, the DEA spreads its tentacles all over the world in its drug war crusade. This form of U.S. meddling, while contributing to corruption and economic sabotage in host countries, also has deadly consequences – including sparking the infamous Allende massacre.

An investigative report by ProPublic and National Geographic – barely mentioned in the mainstream media – describes how a gamble by the DEA in Mexico led to the Zetas cartel invading Allende and other towns to carry out mass murder and destruction.

“But unlike most places in Mexico that have been ravaged by the drug war, what happened in Allende didn’t have its origins in Mexico. It began in the United States, when the Drug Enforcement Administration scored an unexpected coup. An agent persuaded a high-level Zetas operative to hand over the trackable cellphone identification numbers for two of the cartel’s most wanted kingpins, Miguel Ángel Treviño and his ​brother Omar.

Then the DEA took a gamble. It shared the intelligence with a Mexican federal police unit that has long had problems with leaks — even though its members had been trained and vetted by the DEA. Almost immediately, the Treviños learned they’d been betrayed. The brothers set out to exact vengeance against the presumed snitches, their families and anyone remotely connected to them.”

Surviving residents describe how dozens of trucks with armed men descended on the town, rounding up family members for execution and burning the bodies. No mercy was shown to the young. Homes and business were demolished after being looted.

Despite the days-long rampage, the Zetas cartel never found the snitches they were looking for, because they were in the sheltering hands of the U.S. government as DEA informants.

While the cartel carried out the carnage, not a single policeman showed up, despite being deluged with calls about chaos and home invasions. Firefighters, responding to a blaze where bodies were being burned, were told to turn around or be killed. The mayor of one town was notified by the cartel beforehand, and did nothing to thwart the attack.

Much of the rampage occurred “within sight or earshot not only of passersby but also of government offices, police stations and military outposts.”

The gang of killers traveled 35 miles from Allende to Piedras Negras, rounding up people along the way. It’s estimated that about 300 people from 80 families were murdered.

When a 15-year-old boy, Gerardo Heath, who had nothing to do with the cartel or DEA informants was taken by the armed men, his mother called the mayor. According to the mother:

“Within minutes, we called the mayor of Piedras Negras. He was at a wedding. He said that he felt terrible about what had happened to us, but there wasn’t anything he could do. Not a single police car came.”

This corruption within the ranks of Mexican government – fueled by bribe money and fear of a horrible death – is, of course, well known by the DEA. The agency knew chances were high the Mexican federal police force would leak news of a Zetas snitch, identified as convicted Zetas operative Jose Vasquez, now serving a prison sentence.

The DEA boasts of having captured the Treviño brothers, but says nothing of its own culpability in the mass murder campaign. The federal agency is no stranger to threatening family members, either. When pressuring Jose Vasquez, who lived in Dallas, to reveal the cell ID numbers, agents told Vasquez they’d arrest his mother and wife unless he snitched.

“There’s going to be a lot of murders that come behind this,” Vasquez insisted before finally giving in.

ProPublica interviewed Richard Martinez, the DEA agent who led the investigation resulting in the fateful intel sharing with Mexican police. According to interviews, Martinez gave the numbers to his boss, who gave them to a DEA supervisor in Mexico City, who then shared them with Mexican police.

Martinez, now suffering from aggressive cancer, reportedly welled with tears when asked about his role, saying in the interview:

Another convicted Zetas operative named Cuellar told how the DEA admitted their primary cause in initiating the mass murder in and around Allende.

“I remember my first meeting with the DEA. I was telling them what was happening in Coahuila, about all the violence. I remember Ernest [Gonzalez] getting up from the table, going outside and confronting one of the DEA bosses. He started shouting at him. He said something like, ‘Did you hear what’s going on? All this because you sent those numbers to Mexico.”

The ultimate fault lies with those dark souls who carried out the atrocities, but this black market web of corruption and violence thrives because of prohibition.

Agencies like the DEA thrive on the injustice of the drug war. Criminalizing the victimless behavior of ingesting a substance, and attempting to ban that substance from existence, was first proven wrong with alcohol prohibition — yet government is repeating the same mistake with drug prohibition.

We know, however, that legalization cripples cartels and improves public safety on a number of levels, including products being made in a legal free market. State-level cannabis legalization in the U.S., while tremendously boosting economies, has also hurt cartels, which have increasingly turned to heroin and other opiates.

Incidentally, the American opioid epidemic, which cartels are now preying upon, is a direct result of American Big Pharma knowingly getting the nation hooked on opioid painkillers. And this couldn’t have happened without the complicity of federal regulators who grant monopolies to drugmakers and turn a blind eye at their crimes against humanity.

As the sheer insanity of prohibition becomes ever more obvious — such as DEA’s decision to keep cannabis classified as a Schedule 1 narcotic despite its proven medical benefits — the DEA is exposed as nothing more than a protection racket for legal drugs and pharmaceuticals. There are strong calls in Congress to examine the DEA’s deliberate slowing of investigations into opioid drugmakers.

Bolivia’s president, Evo Morales, recently told an audience that expelling the DEA from Bolivia was one of the best things the country could have done for itself, allowing it to recover economic and political sovereignty.

“The United States used the war on drugs in order to control the country’s politics and loot our natural resources,” Morales said bluntly.

The DEA and other agencies involved in the drug war are not unlike the cartels they help create – stealing cash and property from innocent people, killing people during raids and confrontations, threatening family members of targets, and so on. Now we know they bear some responsibility for the Allende massacre, and possibly other atrocities carried out as the black market continues to evolve under the war on drugs.