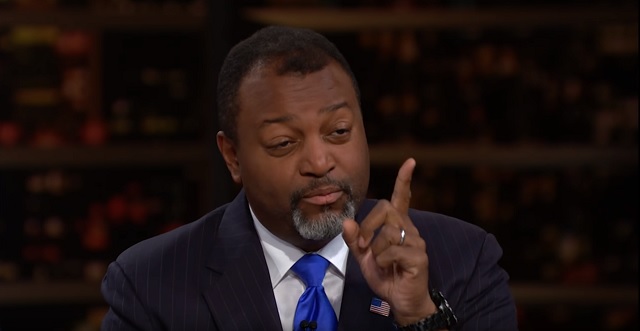 MSNBC counter-terrorism analyst Malcolm Nance demanded an apology from Breitbart editor-in-chief Alex Marlow for accurately reporting on how he called for ISIS to bomb Trump Tower.

Breitbart, along with many other sites, reported on a disturbing tweet Nance sent out in April, saying: “This is my nominee for first ISIS suicide bombing of a Trump property.” Nance later deleted the tweet without providing an explanation, or an apology.

In typical leftist fashion, Nance now sees himself as the victim.

Friday on Overtime with Bill Maher, Nance told Marlow, “I sorta have a bone to pick with you, you’re Breitbart right, you don’t do fake news? That’s what you’re asserting here?”

“There was this article about a 35-year counter-terrorism expert who claimed they wanted Trump Tower attacked that was written in Breitbart,” he said. “I got 31 death threats and that came from your website…you gonna apologize to me?”

Marlow wasn’t familiar with the article in question, but responded asking, “Are you really suggesting that Breitbart doesn’t get death threats? That our lives aren’t put in danger?”

“No no no, you can apologize to me now,” Nance said. “I’m not threatening you.”

“Show me the story, and if the story is as you describe it, I’ll be happy to offer an apology to you.

“I will come to your office to see that retraction,” Nance said.

“OK, I would love to see it, send [the article] to me,” Marlow responded.

Breitbart’s article was entirely correct, and once again, Nance failed to provide any explanation for why he “nominated” Trump Tower Istanbul for an ISIS suicide bombing.

Rather than Marlow apologize for accurately reporting on Nance’s tweet, Nance should apologize to President Donald Trump and all the tenants of Trump Tower Istanbul for suggesting ISIS suicide bomb their offices and homes.