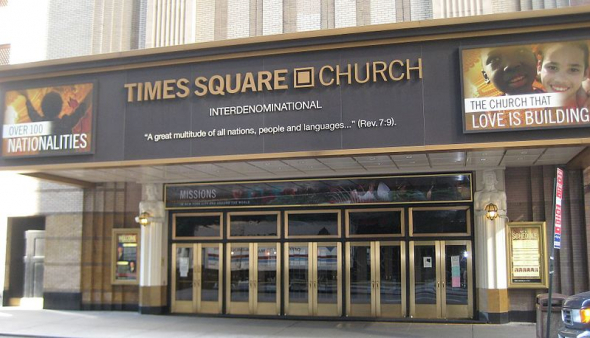 A Muslim man burst through the doors of New York City’s Times Square Church earlier this month and shouted “Allahu Akbar,” Arabic for “God is great.” Obviously, he was not speaking of the Christian God as he threatened to blow up the church and kill any Christians there upon his return.

“I am going to blow up the church and come back and kill any Christians,” Noel Droni said, according to court papers, as he shouted “Allahu Akbar!”

This occurred shortly after he confronted another homeless man outside the church and asked if he was a Christian. When the man affirmed he was a Christian, Droni allegedly pulled out a red wrench from his backpack and smashed the glass door of the church.

Police showed up and arrested Droni. Police said that he refused to answer questions and was charged with criminal mischief and is held in jail on $1,000 bail!

Droni’s lawyer, Russell Novack, said he is “confident in a satisfactory outcome.”

“Other than that, I can’t discuss the facts of the case,” he added.

One thousand dollars bail? For threatening to blow up a church and murder Christians? This is another injustice in the name of political correctness when it comes to those who follow Islam.

Oh wait, interestingly enough, The New York Daily News, which reported on the story never mentions the man being Muslim, but instead, they refer to him as a “homeless man.”

“A Muslim man screaming “Allahu akbar” broke through a church door and stormed inside in New York City, vowing to kill all the Christians,” commented Pamela Geller. “And the media’s angle? The guy was homeless and mentally ill — not Muslim and extreme.”

Corporate media wants nothing to do with calling out the religion of pieces or those affiliated with it. Remember what took place after the Manchester terror attack in May? The media and their political comrades did everything they could to try and blame that Islamic jihad attack on anyone but Islamic terrorists.

Following the London attack, Hillary Clinton not only defended London Mayor Sadiq Khan, who once represented 9/11 Al-Qaeda member Zacarias Moussaoui, called moderate Muslims “Uncle Toms” and said terrorism was “part and parcel” of living in a major city, but she also went on to claim that the best means of fighting against terrorism is to “reach out to the world” and “understand” foreign people, their culture, their religion and their food.

“Getting to know one another. Learning about the experiences, the lives, the cultures, the religions, the food,” she said. “This is not a time to lash out, to incite fear or to use tragedy and terror for political gain.”

This isn’t about political gain. This is about allowing those who worship false gods and use that worship as justification for murdering other people.

When are these people going to see that? Or, just maybe, they do see it and that’s exactly what they want.