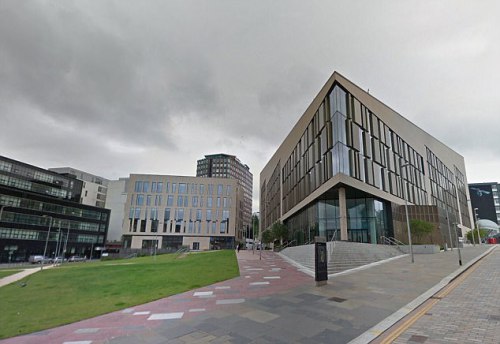 Not only do observing Muslims wipe their butts with their hands instead of toilet paper (see “Muslim chef contaminates kitchen with feces by wiping his butt with his hand, in accordance with Islamic toiletry code”), Muslims also dump their poop in all the inappropriate places.

Graeme Donohoe reports for the Daily Record, June 11, 2017, that the administration of the University of Strathcylde in Glasgow, Scotland issued a memo asking its “multicultural” students and staff to stop defecating in showers and trash bins.

The memo, posted on June 8, 2017, was emailed by the operations management team of the University’s state-of-the-art Technology and Innovation Centre (TIC). It reads:

“Given the incidence of people pooing in bins, showers and the likes, can I please remind all TIC occupants that the toilets have been provided for that specific purpose. All bodily fluids, solids and toilet paper must be disposed of down the toilet. While I appreciate that the TIC population is multi-cultural and different countries have different practices, here in the UK the accepted practice is to use only the WC.”

The memo was provoked by complaints from the university’s sanitation staff about having to clean feces from “unusual places” in the TIC building.

An “insider” said: “You wouldn’t imagine problems like this at a place at the forefront of technology. This building houses some of the most intelligent brains in the world – yet they don’t appear to know how to use the toilet. The cleaners are sick of coming across poo and used toilet paper in places it just shouldn’t be.”

Some “employees” were upset by the email. So the cucked university actually issued an apology for the hygiene memo. A Strathclyde University spokeswoman said:

“We’ve apologised for any offence caused to colleagues. The email contained sentiments completely contrary to our institutional values and should not have been sent. It was recalled as soon as it came to our attention and we swiftly issued an apology to staff.”

And now for a delightful piece of information all of us should know.

The Daily Record says that according to a 2012 report by UNICEF and the World Health Organization, more than 1.1 billion people in the world practice “open defecation” — i.e., pooping outside of the toilet. The largest numbers of “open defecators” are in India (626 million), followed by Indonesia (63 million), Pakistan (40 million) and Ethiopia (38 million) — all countries with large Muslim population.

But with the invasion of Muslim “refugees” and “migrants,” “open defecation” has come to the streets of Europe, as seen in these pics of a Muslim man in Italy who, after taking a dump in an alley, washed his anus at a public drinking fountain, then drank water using the same hand.