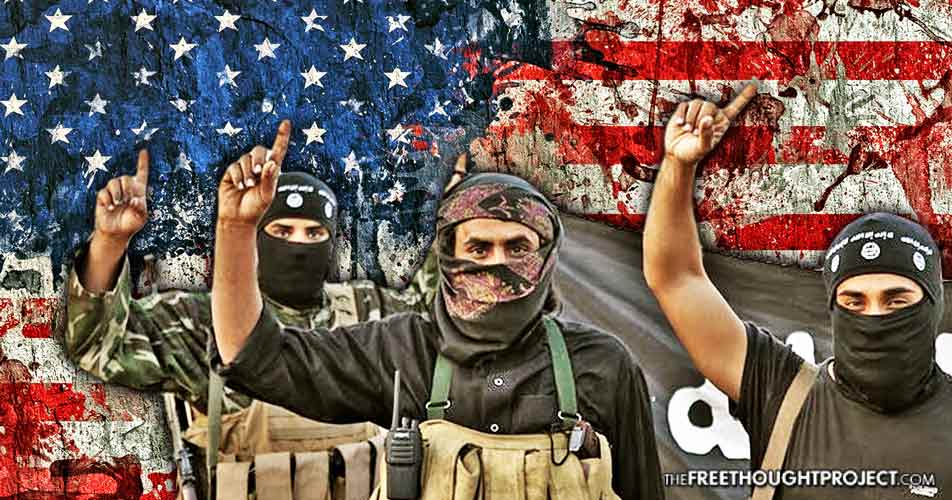 For the last several decades, the US government has openly funded, supported, and armed various terrorist networks throughout the world to forward an agenda of destabilization and proxy war. It is not a secret, nor a conspiracy theory, America arms bad guys.

Given the insidious history of the American empire and its creation and fostering of terrorist regimes across the globe, it should come as no surprise that the overwhelming majority of politicians would refuse to sign on to a law that requires them to ‘Stop Arming Terrorists.’ And, that is exactly what’s happened.

H.R.608 – Stop Arming Terrorists Act was introduced by Rep. Gabbard, Tulsi [D-HI] on January 23 of this year. The bill doesn’t have any crazy strings attached and its original cosponsors are a mix of Republicans and Democrats — highlighting that it transcends party lines.

“For years, our government has been providing both direct and indirect support to these armed militant groups, who are working directly with or under the command of terrorist groups like Al-Qaeda and ISIS, all in their effort and fight to overthrow the Syrian government,” Gabbard said in an interview earlier this year.

The text of the bill is simple. It merely states that it prohibits the use of federal agency funds to provide covered assistance to: (1) Al Qaeda, Jabhat Fateh al-Sham, the Islamic State of Iraq and the Levant (ISIL), or any individual or group that is affiliated with, associated with, cooperating with, or adherents to such groups; or (2) the government of any country that the Office of the Director of National Intelligence (ODNI) determines has, within the most recent 12 months, provided covered assistance to such a group or individual.

The only thing this bill does is prohibit the US government from giving money and weapons to people who want to murder Americans and who do murder innocent men, women, and children across the globe. It is quite possibly the simplest and most rational bill ever proposed by Congress. Given its rational and humanitarian nature, one would think that representatives would be lining up to show their support. However, one would be wrong.

After nearly 5 months since its introduction, only 13 of the 535 members of Congress have signed on as co-sponsors. What this lack of support for the bill shows is that the federal government is addicted to funding terror and has no intention of ever stopping it.

To add insult to treason and murder, Senator Rand Paul [R-KY] introduced this same legislation in the Senate. He currently has zero cosponsors.

Given the overwhelming lack of support for a bill that simply asks the government to stop giving money to people who behead children and video it, it should come as no surprise that Donald Trump signed hundreds of billions of dollars in weapons deals with other countries who also fund these people.

As Americans bicker over Trump’s bogus and non-existent Russian scandal, he’s signing a deal worth hundreds of billions of dollars with the largest state sponsor of terror in the world — ensuring decades of future wars and the continuation of the cycle of terrorism.

What’s more is the fact that less than one week after publicly reprimanding Qatar for terrorism, President Trump signed off on the sale of $12 billion in weapons to the country he referred to as a “funder of terrorism.” This move, in Trump’s own stance, makes him a de facto funder of terrorism now.

What this lack of support for the bills and the recent moves to arm the terrorist regimes illustrates is the fact that the US has no intention of ever stopping terrorism. Trump, just like Obama and Bush before him, will continue to foster the growth of terrorism to enrich those who profit from war.

Terrorism is necessary for the state. War, is the health of the state.

Without the constant fear mongering about an enemy who ‘hates our freedom’, Americans begin questioning things. They challenge the status quo and inevitably desire more freedom. However, when they are told that boogeymen want to kill them, they become immediately complacent and blinded by their fear.

While these boogeymen were once mostly mythical, since 9/11, they have been funded and supported by the US to the point that they now pose a very real threat to innocent people everywhere. As the recent attacks in the UK illustrate, ISIS is organizing and spreading. Even the terrorists in the UK had ties to the British government who allowed them to freely travel and train with ISIS-linked groups because those groups were in opposition to Muammar Gaddafi, who the West wanted to snub out.

It’s a vicious cycle of creating terrorists, killing innocence, and stoking war. And, unless something radical happens, it shows no signs of ever reversing.

The radical change that is necessary to shift this paradigm back to peace is for people to wake up to the reality that no matter which puppet is in the White House, the status quo remains unchanged.

Trump is proving that he can lie to get into power and his supporters ignore it. If you doubt this fact, look at what Trump did by calling out Saudi Arabia for their role in 9/11 and their support for terror worldwide prior to getting elected. He now supports these terrorists and his constituency couldn’t care less.

This madness has to stop. Humanity has to stop being fooled by rhetoric read from teleprompters by puppets doing the bidding of their masters.

Please share this article with your friends and family to show them how their supposed ‘leaders’ — except for a few good ones — are content with funding the enemy, laying waste to rights, and condone the murder of innocence.