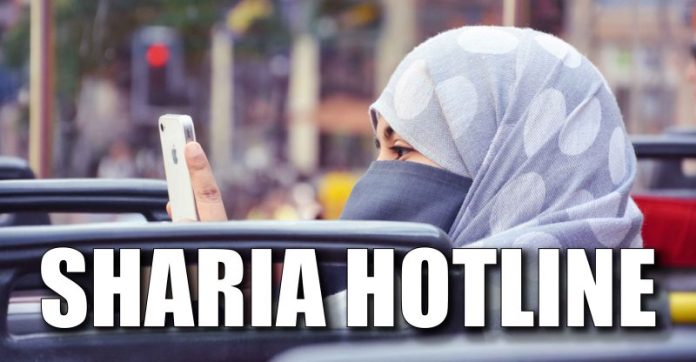 The latest bit of fascism coming out of Minnesota and its mayor has a new hotline the citizens are encouraged to call to snitch on their neighbors and others who might have a prejudice towards others. We like to think of it as the “Shariah hotline.”

Minnesota’s new hotline to report alleged “hate crimes” was published on the city’s website on Monday.

“Through its 311 service, the City of Minneapolis has opened a new hotline for reporting hate crimes, which are harassing behaviors motivated by prejudice,” the press release read. “The hotline number is 311 for anyone calling from within the city or 612-673-3000 statewide. The 311 hotline will be answered 7 a.m.-7 p.m. weekdays and 8 a.m.-4:30 p.m. weekends. Those with a report to make can also call the Department of Justice at 612-664-5600. As always, in the case of immediate physical violence, property damage or threats, people should call 911.”

Now, on the one hand, people should report “physical violence, property damage or threats,” but what is determined to be “harassing behaviors motivated by prejudice”? Isn’t that a bit subjective?

The website defines a “hate crime” as “any crime against a person or property motivated by prejudice against someone’s race, religion, disability, sexual orientation, ethnicity, gender or gender identity.”

It’s rather silly, but isn’t all crime a form of hatred against someone else? I believe it is, so the claim of hate crime is actually an oxy-moron.

What’s even more telling is that the website adds:

“Minneapolis is committed to human rights and racial equity for everyone who lives in, works in and visits our city. Several organizations in Minnesota – Minneapolis Department of Civil Rights, Minnesota Department of Human Rights, City of Saint Paul Equal Opportunity Office and the Minnesota FBI – are working together to ensure all Minnesotans feel safe and welcome. Over the past several months, the partners have worked to increase community access to information and resources necessary to address issues of discrimination.” (emphasis mine)

The site also defines discrimination as “an action or a decision that treats a person or a group negatively for reasons such as their race, religion, disability, sexual orientation, ethnicity, gender or gender identity.”

So, if you believe Islam is of the devil and a totalitarian political and religious death cult, and you actually state that, you might just fall under this attack, per the definition, on your right, which is protected under the First Amendment. Additionally, if you believe people who engage in sodomy or lesbianism are mentally ill, according to Romans 1:18ff, and you voice that, you might just be guilty of discrimination and a possible “hate crime.” Furthermore, if you believe a person is mentally ill because they are a man but claim they are a woman, or vice versa, and you voice that belief, you may also be guilty and reported.

According to the Star Tribune, the announcement of the hotline came “amid signs of a recent surge of such incidents affecting Muslims and Jews across the country, many of which go unreported.”

“Since the general election, many of us have experienced, witnessed firsthand or heard of actions of: racism, xenophobia, sexism and bigotry directed at people here and in cities across the United States,” Minneapolis Department of Civil Rights Director Velma Korbel wrote in a statement posted on the city’s website. “In no uncertain terms, hate-motivated speech and actions have no place in Minneapolis nor will they be tolerated.”

But what if that speech is true? What is that speech is to warn others but in doing so, the ideology being exposed is held by those who end up reporting you? Government has no business shutting down free speech that speaks truth. No one is free to lie or to slander. While people engage in such behavior, they can lawfully be held to account for their speech. However, when one speak the truth, whether it is about a religion such as Islam or behavior such as those homosexuals engage in, there is no reason for government to be involved in any of that.

This comes just weeks after Minnesota Mayor Betsy Hodge’s gave her State of the City in an Islamic mosque following the Manchester Islamic jihad attack and declared, “I will not compromise the public safety of the people of Minneapolis to satisfy Trump’s desire to put politics before public safety. Minneapolis is being built and strengthened by people from all over the world and I am grateful for their commitment to our city. I stand with them today and will continue to take that stand as the President-elect prepares to take office.”

WATCH: @PeteHegseth confronts Minneapolis mayor who bashed President Trump during 'state of the city' speech in a mosque pic.twitter.com/CqtxpMji6m

Former Congresswoman Michele Bachmann said the new hotline is a form of fascism and that such measures to stifle the freedoms of the people against those engaged in lawless activities would not hold up in court.

“Hate speech hotlines operate as government enforcement of fascism,” she said in an email to WND. “They are a denial of free speech and the very definition of government censorship.

“Looking for government informants to rat out speech the government forbids goes to the heart of denying American citizens our inalienable rights. Governments CAN NOT do this under our constitution.”

Bachmann said the hate-crime hotline is a stealth move by Hodges and the city council to impose Islamic anti-blasphemy laws on non-Muslims.

“By installing Islamic anti-blasphemy hotlines and advertising for informants, Minneapolis is violating the doctrine of separation of church and state,” she added. “What difference is there between the Minneapolis City Council action and United Nations resolution 16/18 advanced by former Secretary Hillary Clinton?”

Hodges and her supporters are pulling the mask off to show that they are the enemies of freedom and enemies of America in their support for those who believe in a totalitarian system that is anti-Christ and anti-American to the core.

Islamists, like Communists, should not be welcome in the united States of America and continue to practice their death cult religion. We have laws, based on biblical law, which are supposed to be used to bring justice on those who would seek to tear down our the foundations of our Christian heritage in this land.

Our Constitution also provides the means of stopping the Islamization of America, if only we would use it.

Additionally, when it comes to open, practicing homosexuals, the Bible, as well as our founders understood such behavior to be a crime against nature, and as such, justice was to be brought on those who engaged in such activities.

Here’s a very simple question, if a crime has actually been committed, regardless of the motive, isn’t that why the local police phone number, or even 911, is put in service? Why is there really a need for 311? Isn’t it to get the people in the practice of snitching on their neighbors? I believe it most certainly is just that.