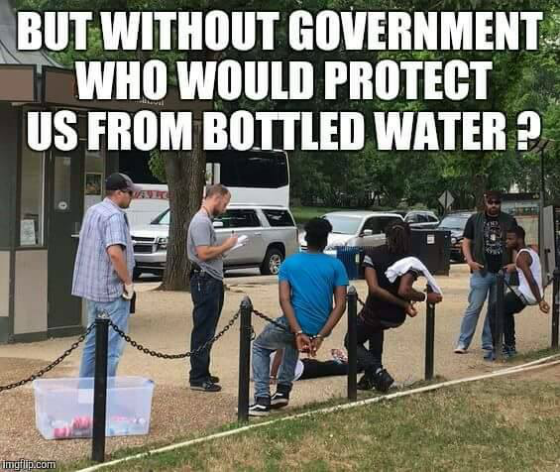 Lemonade stands, paper routes, and bake sales seem yet destined for the dustbin of history, thanks to an imperious State, which — to its sanctimonious detriment — manages to pull off seemingly impossible PR predicaments of its own making, like the handcuffing of teenagers for selling bottled water on the National Mall without a permit Thursday evening.

Perched atop chains interlinking fence posts lining the walk near Smithsonian Castle, three justifiably perplexed Black youth, wrists in handcuffs behind their backs can be seen speaking with U.S. Park Police — bottles of water resting in an evidence bin, nearby.

Tweeted by tour guide, Tim Krepp, as he passed the scene, photos of the three, aged 16 and 17, would appear to any casual observer without context to be a possible apprehension of at least petty criminals — not the three kids hawking bottled water for a few extra dollars to willing Washington, D.C., tourists on a hot day, that the incident actually was.

U.S. News reports, “A spokeswoman for the U.S. Park Police, Sgt. Anna Rose, confirms three teenagers were detained for vending without a license, but says she feels ‘this has gotten blown out of proportion.’

“The three teens, ages 16 and 17, were detained for ‘illegally selling water’ but were not charged, Rose says. They were held until their parents arrived. A fourth individual was immediately released after officers determined he was uninvolved, she says.”

For good measure — rather, to deflect the flying conflagration of a rightfully livid backlash hurled in her department’s direction — Rose added, “this was not some hours-long ordeal.”

That’s not the point.

None of that is the point — even though the unnamed, plain clothes officers did not charge the adults-in-making with the crime of not possessing the State’s permission slip to vend water on the apparently sacrosanct National Mall.

Of course this incident whipped the Internet into a fury — these are kids. Selling sealed bottles of water. In the summer. To willing customers. Voluntarily.

There should be anger — as well as indignation, sadness, frustration, vitriol, and action.

In fact, perhaps the sole positive development in this affair is that the collective American rage against this absurdity categorically hemorrhaged at the modern portrait of the childhood lemonade stand, its young vendors in the shackles of a police state, nanny state, and an infinitesimally legislated one — all together, summoning bloody echoes from two centuries of injustice — the spectacle sardonically unfolding in the taxpayer-bloated belly of the beast that is the nation’s capital.

Of course — capping off a week of news mangling every sense of justice, logic, peace, and cooperation only a few of us harbored anyway — of course this scene lit fires under the seats of the otherwise preoccupied.

Placing handcuffs around the wrists of teenagers whose only conceivable guilt lies in the breaking of a code enacted inarguably solely for profit by the District, handily cements several theories on the surreptitious arrival of fascism in America.

To paraphrase a recently viral meme, “If you think you’re free in this country, ask yourself what you can do that isn’t taxed, regulated, or licensed?”

Of course, both of those lowly pursuits would also be verboten in most places in the nation — California shut down a little girl’s lemonade stand when authorities found the puny perpetrator remiss in securing a $200 permit … and in need of around $3,500 to bring the stand into compliance with government mandates for continued operation.

But don’t think the issue here pertains only to wares sold without the State dipping its hand in the offenders’ pockets for tax — no, giving away water or lemonade won’t necessarily work either.

Florida harbors a sizable homeless population, given its warmer clime and voluminous beaches, but an epidemic threatens everyone without a house — the stomping out of charitable work, in numerous arrests of people providing them with food.

Feed the homeless, pay a fine — and it’s the same from a lengthening list of state legislatures, which should not only be ashamed, but fired.

History’s legendary human rights advocates tell us to disobey unjust, unethical, and immoral laws for a sound reason far beyond just that it’s the right thing to do — unjust laws beget the same, and more so, ad infinitum.

Giving an inch — allowing ineffectual, misbegotten codes, laws, and regulations to accumulate, unaddressed — results only in the taking of miles by the State. We did this — all of us — we’re responsible for the spectacle of three Black youth detained in cuffs for selling water. Water.

It’s time to stop pretending such a scenario facsimilizes anything even approaching acceptable.

Overcriminalization of everyday life has so invaded mundanity this nation has forgotten its free-spirited and freedom-cherishing soul — for the worst.

It would be unfortunately optimistic to hope images of the three teen water-sellers in cuffs would be a watershed moment — the instant Americans knew that, for security and ease, liberty has been tossed overboard — but that won’t happen.

Tragically, outrage has a short fuse — but apathy and complacency are the bedrock of a totalitarian State.

Encapsulating everything humorous and not so much, Rose explained,

“Vending on the National Mall is illegal without a permit. The National Park Service has a whole office dedicated to permitting.”