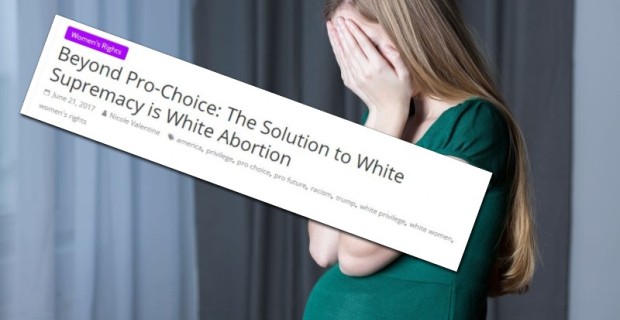 “The white family unit must be destroyed”

A feminist magazine is calling on white women to solve historical racism and white supremacy by aborting all their babies.

In an article entitled, Beyond Pro-Choice: The Solution to White Supremacy is White Abortion, writer Nicole Valentine blames “white families” for standing in the way of a “progressive society” by “initiating their parasitism” to exert “full dominion over the enslaved and oppressed people of color.”

“Whites are embedded from birth with the sense of common white identity, and this identity conditions them to replicate the white family unit, thus furthering the cycle of white supremacy in America. That is why the white family unit must be destroyed,” writes Valentine.

“White women: it is time to do your part! Your white children reinforce the white supremacist society that benefits you. If you claim to be progressive, and yet willingly birth white children by your own choice, you are a hypocrite. White women should be encouraged to abort their white children, and to use their freed-up time and resources to assist women of color who have no other choice but to raise their children,” she adds.

Valentine goes on to demand that white women also adopt black children “who have lost their parents to the destructive white supremacist society that you have enabled and encouraged.”

The magazine, which describes itself as being “dedicated to promoting diversity and multicultural values,” is loaded with other stories that border on being satirical, including “Women can’t be rapists,” “Childhood toys are racist!” and “It’s time to talk about Whitesplaining”.

The website’s “about us” page also blames “radical right wingers” as being “responsible for several hate crimes and terrorist attacks.” The writers are mostly “current and past students”.

Valentine’s argument that white women need to have more abortions because “women of color do not often have the same privilege to choose termination as do white women” is complete nonsense given that black children are aborted at three times the rate of white children.

The article received hundreds of negative comments, with respondents pointing out the blatantly racist tone of the piece.

“Sometimes I think there must be a contest going on in which the author of the most radical, insane, warped, twisted and fever-brained article will win a prize. If so, this hateful screed should surely win at least an honorable mention,” wrote Steve Biddle.

“If this is not incitement to genocide, I don’t know what it is. If you change the term “white” to anything else, it looks exactly like that no matter how you flip it,” remarked Victor Crainic.