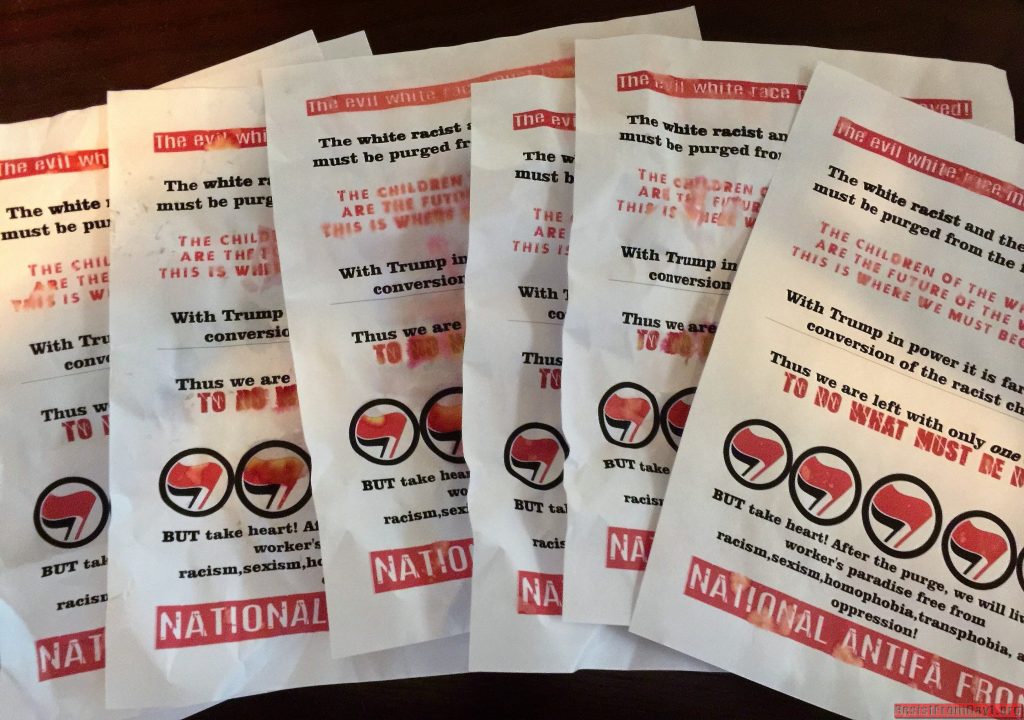 It looks like the Antifa Marxists are at it again. Now, at least one Antifa anti-Trump protester apparently forgot to get rid of his racist, hateful pamphlet that read, “The evil white race must be destroyed!”

“The white racist and their Heeb masters must be purged from the face of the earth!” the pamphlet read.

It’s almost laughable that these open racists are basically labeling anyone with light skin as racists. However, they then go on to attack President Donald Trump.

“With Trump in power it is far to [sic] late for conversion of the racist children,” the flyer read.

I would imagine it’s also a problem for this person to get an education and a class in logic too.

“Thus we are left with only one option… to do what must be done!!” the flyer concluded not exactly saying what needed to be done, but it’s clear that what needs to be done is white genocide.

Then the writer seeks to encourage readers by writing, “But take heart! After the purge, we will live in a worker’s paradise free from racism, sexism, homophobia, transphobia, and oppression!”

Right there, you see the silly notion that so many have succumbed to in the past, believing that annihilating a particular group of people will usher in a utopia. Clearly, these people don’t learn any lessons from history such as Nazi Germany or what took place in Armenia.

Their real attack is not so much people with white skin as it is Christian morality. They hate those who point out that homosexuality is sin and a crime against nature and nature’s God. They hate that Christians would call them to see biblical roles of men and women. They despise the fact that Christian teachings built America from it’s earliest days hundreds of years ago. They can’t stand that we call on men to act and dress and behave as men and the same for women.

They won’t get a “worker’s paradise” if they follow through with any of this. They will get a police state. They will get the Marxism they so desperately crave, but the mask will come off soon enough and they will realize what they thought was God to them will be the devil. Tyranny is always like that, alluring people from God and His law and in its place substituting a tyrannical beast (Revelation 13) demanding to be worshiped as though it is the lawgiver rather than the God of the Bible.

What do these people do when they aren’t protesting? Are they on government welfare? Are they funded by George Soros to engage in their inciteful and inflammatory rhetoric and behavior? They have already demonstrated that they do not care about other people and will engage in some of the vilest behavior. This is a call to murder people who have done them no harm.

These people are already making threats to desecrate graves on the 154th Gettysburg anniversary. I’m hopeful that those who enforce the law will deal with those making such threats appropriately. In fact, it’s way past time for the militia to be revived in this country among the people. Per the Constitution, it is we the people that should be a part of that and put down insurrections and invasions. Antifa are insurrectionists. They are not simply protesters.

As National Review points out:

Lately, Antifa have emerged as the militant fringe of #TheResistance against Donald Trump — who, they maintain, is a fascist, ushering into power a fascist regime. In Washington, D.C., Antifa spent the morning of Inauguration Day lighting trash cans on fire, throwing rocks and bottles at police officers, setting ablaze a limousine, and tossing chunks of pavement through the windows of several businesses. On February 1, Antifa set fires and stormed buildings at the University of California–Berkeley to prevent an appearance by Breitbart provocateur Milo Yiannopoulos. (They succeeded.) In April, they threatened violence if Ann Coulter spoke on the campus; when the university and local law enforcement refused to find a secure location for her to speak, she withdrew, saying the situation was too dangerous.

This kind of rhetoric demonstrates why America is on the verge of widespread chaos and civil unrest. Civil war is going to come to America again.

Get ready, these useful idiots are attempting to usher in a New World Order in the united States, but I’m gonna go out on a limb and guess that their plan is going to backfire right in their collective faces.

I have just one question to ask, if I may. Where is the Southern Poverty Law Center when it comes to Antifa? Not. One. Peep.