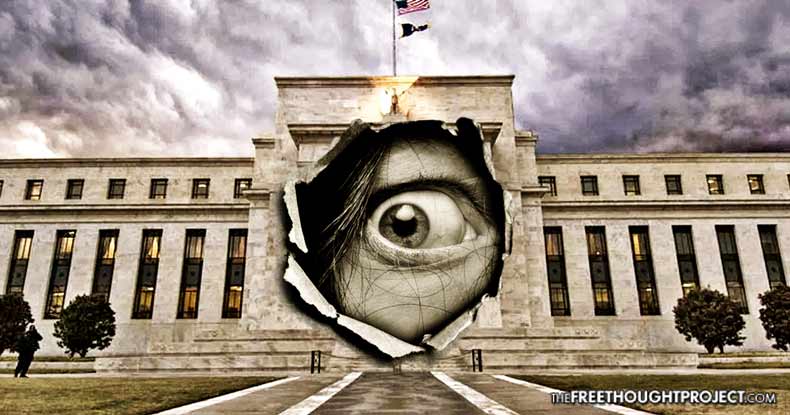 While some may have called it a conspiracy theory at one point, a new report is shedding light on the United States Intelligence services’ cozy relationship with the nation’s central banking structure, and how they collaborate to spy on foreign banks.

Confidential accounts within the Federal Reserve have been used by the U.S. Treasury and other departments “several times a year to analyze the asset holdings of the central banks of Russia, China, Iraq, Turkey, Yemen, Libya and others,” according to a report from Reuters that cites more than a dozen current and former senior U.S. officials.

“The U.S. central bank keeps a tight lid on information contained in these accounts. But according to the officials interviewed by Reuters, U.S. authorities regularly use a ‘need to know’ confidentiality exception in the Fed’s service contracts with foreign central banks.”

The report claimed that the exception was used by U.S. federal officials “to glean information about the movement of funds in and out of the accounts.” That information was then used to help the U.S. “monitor economic sanctions, fight terror financing and money laundering, or get a fuller picture of market hot spots around the world.”

The Federal Reserve was established in 1913, and the current headquarters in New York houses around $3.3 trillion in assets from around 250 foreign central banks—which adds up to about half of the world’s dollar reserves.

“In all, the people interviewed by Reuters identified seven instances in the last 15 years in which the accounts gave U.S. authorities insights into the actions of foreign counterparts or market movements, at times leading to a specific U.S. response.”

The report cited a case from March 2014, in which U.S. intelligence used the Federal Reserve loophole to monitor Russia after its invasion of Crimea. As a result, when the Obama administration responded by placing economic sanctions on Russia, and the foreign holdings at the New York Fed dropped by $115 billion, the U.S. automatically knew that Russia’s central bank had pulled its funds.

The Federal Reserve acknowledged the practice of disclosing account intelligence, but attempted to downplay it, by claiming it was only used on “rare occasions.”

“While our account agreement does provide for the sharing of information with the U.S. government in limited circumstances, we require a clearly demonstrated need for the information and a commitment that the information will be treated confidentially,” a New York Fed spokeswoman told Reuters. “This exception has been used on rare occasions and on a limited basis for such issues as compliance with sanctions requirements and anti-money laundering principles.”

Reuters noted that the requests from information through the Federal Reserve “became more frequent after the passage of the 2001 U.S. Patriot Act, mostly from the Office of Foreign Assets Control, a Treasury division enforcing sanctions and targeting terrorist financing, money laundering, and weapons and drugs trafficking.”

The Free Thought Project has reported on multiple instances of the failure of the Federal Reserve. In June 2016, former Federal Reserve Chairman Alan Greenspan even warned that the world is in “the worst period” he has ever seen.

“If we went back on the gold standard and we adhered to the actual structure of the gold standard as it exited prior to 1913, we’d be fine,” Greenspan said. “Remember that the period 1870 to 1913 was one of the most aggressive periods economically that we’ve had in the United States, and that was a golden period of the gold standard. I’m known as a gold bug and everyone laughs at me, but why do central banks own gold now?”

Even Donald Trump called for an audit of the Federal Reserve. However, like most of his promises, this one will most likely be broken too — just as Ron Paul predicted last year.

It is so important to audit The Federal Reserve, and yet Ted Cruz missed the vote on the bill that would allow this to be done.

There have also been multiple versions of legislation seeking to “Audit The Fed,” in order to gain insight into how the world’s most powerful financial institution conducts its business. The latest version was sponsored by Kentucky Sen. Rand Paul, and was approved by the Republican-controlled Committee on Oversight and Government Reform in March.

While the report does serve as a reminder of the capabilities of U.S. intelligence, it shouldn’t come as a surprise. Countries such as Iraq, Libya and Syria have all felt the wrath of the United States after their respective leaders chose to drop the U.S. dollar—and each invasion should serve as a reminder of the power of coercion between the government and the media to push an agenda that furthers the U.S. central banking system.