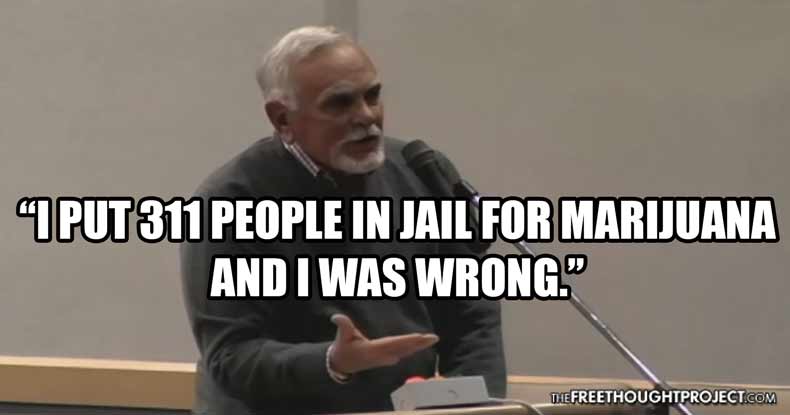 Prior to this year, the state of Florida was regarded as one of the worst possible states to be caught in possession of cannabis. According to a 2009 analysis by former NORML Director Jon Gettman, no state in this country punished people more severely for minor marijuana offenses than Florida. However, thanks in part to a former Florida judge, all this is gradually changing.

By October 3, for the first time in its history, the state will issue IDs to medical marijuana patients. However, according to the former judge, the law doesn’t go nearly far enough.

Throughout the course of his career as a Florida judge, Doug Bench hated marijuana. He admits to locking up hundreds of people for this plant and did so because he thought it was the right thing to do. While it is too late for the now-retired judge to help those whose lives he likely ruined through the persecution of pot, he is taking actions to help countless others now and in the future.

When Bench was diagnosed with Chronic Obstructive Pulmonary Disease, or COPD, which can result in a slow and painful death, his life was saved after realizing the benefits of cannabis in treating his disease. Now, Bench has made it his life’s work to wake people up to the “70 years of lies” the US government has told the citizens about marijuana.

In a public forum on Florida’s Medical Marijuana Implementation earlier this year, Bench presented a powerful speech to note how the law simply does not go far enough to help those who need access to cannabis.

READ MORE:  First of Its Kind Study Finds Cannabis May Be a “Miracle” Treatment for Autistic Kids

“I put 311 people in jail for marijuana offenses — and I was wrong,” the judge says as he opens up his speech.

“I’ve been haunted for 30 years, wondering how many of those (people I put in jail) were using cannabis for medical reasons because our government suppressed that information for 70 years.”

Bench then notes that it was his COPD that opened his eyes to the benefits of cannabis.

“I’m now an advocate for medical marijuana because two years ago, I was diagnosed with a terminal disease,” he explains, before going on to explain that his wife’s “four hours of research on the internet,” found the benefits of cannabis oil for COPD.

“I hated marijuana, I hated the use of marijuana and the violation of the law,” Bench explains. “But, I had no choice, I had to break the law if I wanted to live.”

Bench, like so many other people who the Free Thought Project has interviewed and reported on, was forced to become a criminal to save his own life — in the land of the free.

At this point, Bench then advocates to let free enterprise handle the solution to medical marijuana instead of the slow turning wheels of the bureaucracy. Instead of a top-down system of the state running everything in regards to a plant that heals people, Bench advocates for a horizontal integration, allowing ease of access at all levels, not just those well-connected lobbyists with state ties.

“By the time you finally go (to the doctor to get medical cannabis), you need it now, not 90 days from now,” Bench said before calling out the restrictive nature of the Florida law.

“I think you should take the word ‘debilitating’ totally out of it,” said Bench. “What I had, COPD, a terminal disease, is not on your list.”

“I’d be dead if I had to treat under this mandate of Florida law.”

The heroism and humility shown by Doug Bench are inspiring, to say the least. If a tiny fraction of the people within law enforcement and government had half of this man’s gumption, the drug war would be over tomorrow and people who can benefit from cannabis would have access immediately.

The Free Thought Project salutes you, Judge Doug Bench. Please share this article to show others how change is possible and even the most staunch drug warriors, who “hate marijuana,” have the ability to change.

Please share this article to show others how change is possible and even the most staunch drug warriors, who “hate marijuana,” have the ability to change.