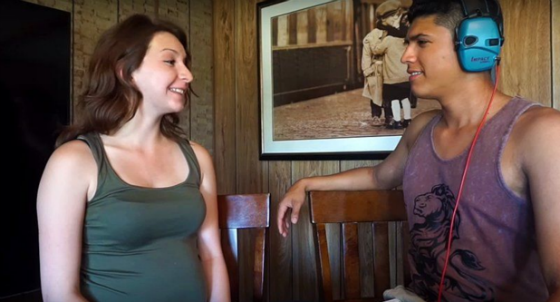 Somehow surmising a book could stop a bullet, Pedro Ruiz III convinced his very pregnant girlfriend of six years, Monalisa Perez, to shoot at a book clasped to his chest for the sake of YouTube views; but — quite unsurprisingly — the impossible stunt went horrendously awry, the bullet entering his body at close range, killing him.

Some 30 onlookers gathered for the stunt — but were instead eyewitnesses to a killing common sense should have prevented.

“Ruiz held up the book — described by County Attorney James Brue as a hardcover encyclopedia — and Perez pulled the trigger on a .50-caliber Desert Eagle pistol, trying to see whether the bullet would go through, according to the criminal complaint,” reports the Star Tribune.

“The Desert Eagle is described by retailer Cabela’s in an online ad as ‘one of the world’s most powerful semiautomatic handguns.’”

According to court documents, “Perez reported that Pedro Ruiz III wanted to make a YouTube video of her shooting a book and he believed that the book would stop the bullet. Monalisa Perez pointed out cameras and stated that the entire incident was recorded.”

Brue noted multiple videos of the gruesome shooting, including footage from a GoPro, exist and are being examined by authorities, but will not be released to the public.

In fact, Perez — pregnant with the couple’s second child — took to social media hours before aiming the weapon at the thick but not bulletproof tome held by the apparently over-confident Ruiz to emphasize the stunt was not her brainchild, tweeting,

“Me and Pedro are probably going to shoot one of the most dangerous videos ever. HIS idea not MINE.”

Ruiz, 22, had been known in the family as a risk-taking, amateur stuntman, as aunt Lisa Primeau — who “pretty much raised” the young father from a young age, following his mother’s death — explained, “We called him our little daredevil.”

Ruiz, she told the Star Tribune, chased thrills and was always “putting a dangerous twist on everything he did” — such as, “jumping into the swimming pool from the top of the house, no hesitation. He was a crazy driver with go-carts.”

Another aunt, Claudia Ruiz, told WDAY-TV, “He had told me about that idea and I said, ‘Don’t do it. Don’t do it. Why are you going to use a gun? Why?’”

“Because we want more viewers. We want to get famous,” Ruiz recalled her nephew replying.

“As they anticipated another child,” the Star Tribune continues, “Ruiz was supporting his growing family working for BNSF Railway and was studying to be a foreman, Primeau said. She added that she and others related to Ruiz ‘are all supporting Mona. It’s a tragic incident. What she did … she has to live with that. It’s the worst punishment she can get. She is pregnant with their second kid. It’s just heartbreaking.’”

Perhaps this hapless stunt-gone-wrong should serve as an imperative lesson to online fame-seekers everywhere not to forget logic, reason, and common sense in quests to set the Internet ablaze.

“They were in love, they loved each other,” aunt Claudia told WDAY-TV. “It was just a prank gone wrong.”