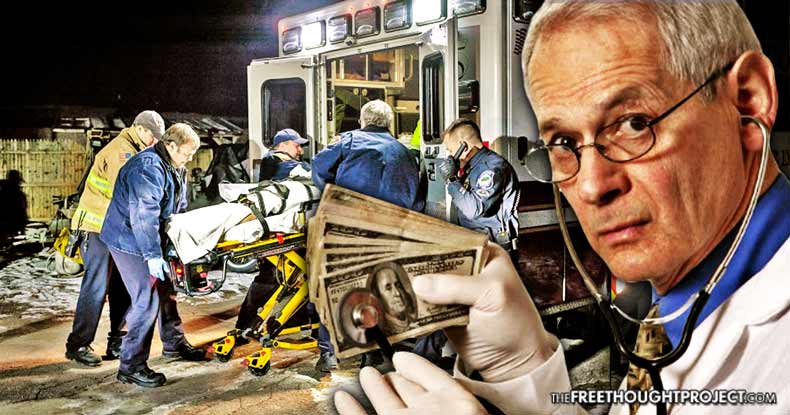 New Jersey — A scathing investigative report from NJ.com has revealed some startling and damning facts about the exponential increase in fentanyl overdoses and the rate at which family practitioners prescribed it. In the center of the equation are pharmaceutical companies who’ve been exposed for paying doctors millions to push their deadly drug.

Prior to 2013, most Americans, unless they knew someone dying of cancer or who lived in immense pain, never heard of fentanyl. Now, this drug, which is magnitudes more powerful than heroin and far deadlier, has become a household name — for all the wrong reasons.

Fentanyl was created to be used as part of anesthesia to help prevent pain after surgery or other medical procedures. It was also used to treat pain in the terminally ill as well as those with severe and chronic debilitating pain. However, in 2013, the unscrupulous big wigs in the pharmaceutical industry saw it as a means of making their already opioid-saturated market that much more lucrative — and addictive.

A dose of fentanyl the size of a grain of sand is lethal. But that didn’t stop companies like Insys Pharmaceutical from spending $1.67 million from 2013 to 2015 pushing this drug on doctors. To be clear, they were not only marketing fentanyl to those who actually benefit from it, but they were rewarding family doctors for giving it to people for things like getting their tonsils out.

As NJ.com points out, since late 2011, enough fentanyl has been dispensed to allow every person who has died of cancer in New Jersey to fill a prescription for the drug eight times.

As doctors and pharmaceutical companies get slaps on the wrist for dealing in this deadly drug, thousands of people across the country are dying at an increasing rate.

For the first time in U.S. History, more Americans died in 2016 of drug overdoses than were killed in the Vietnam War. Let that sink in.

Last year’s death toll in the War on Drugs was 59,000 killed, while during the entire Vietnam War, 1955 to 1975, 58,220 American service members’ lives were lost. And, thanks to the immoral and futile police approach to the drug problem, there appears to be no hope in sight for the tide to change.

According to NJ.com, data and documents show a system where pharmaceutical companies and doctors remain in a cozy and ethically dubious relationship, at best. It’s a system where cash and prescriptions go hand-in-hand. And it’s a system where, time and again, patients suffer and even die when something goes wrong, an occurrence that is far from rare.

In their investigation, NJ.com found some incredibly unscrupulous practices by doctors who were pushing fentanyl onto their patients while raking in all the extra cash from their cartel leaders in big pharma.

“There’s enough money going around that if you saw this in the abstract, you’d think there was a drug cartel happening,” said Arthur Caplan, head of the Division of Bioethics at New York University.

It is a drug cartel, it’s just a legal one. And, it’s one that is solely created and maintained by government granted monopolies and contracts.

As the Free Thought Project previously reported, one of the manufacturers of a fentanyl drug was exposed for lobbying against marijuana as it is a direct threat to their opioid market, as well as their synthetic marijuana business. As the federal government grants Insys permission to make legal synthetic cannabis, they simultaneously enforce a war that kidnap, cages, and kills people for the natural version.

If you want to know why there is a drug war, ask yourself, ‘who benefits from it’?

Legal pot is detrimental to the opioid crisis and reduces addiction. However, this is bad business for big pharma.

Opiate addiction, overdose, and accidental death problems might simply be avoided if, ironically enough, marijuana is made legal nationwide.

As TFTP has documented on several occasions, cannabis holds the promise of helping opiate addicts kick their addiction by substituting their cravings for opiates with the non-addictive pain killing properties of marijuana. And it’s not folklore. Doctors have experimented with cannabis as a substitute for opiates with high degrees of success.

Study after study has confirmed that medical cannabis access reduces harm from opioid abuse among the population. A recent study published in the Drug and Alcohol Dependency journal found that states with legal medical cannabis experience fewer hospitalizations related to opioids.

“Medical marijuana legalization was associated with 23% and 13% reductions in hospitalizations related to opioid dependence or abuse and [opioid pain reliever] OPR overdose, respectively; lagged effects were observed after policy implementation.”

Researchers from the University of California analyzed hospital administrative records for the period of 1997 to 2014. The author reported:

From the outside, this entire scenario looks like a case of big pharma pushing its deadly drugs while reaping massive profits. However, if we look closer, that scenario is not only made possible by, but fostered through, pharma’s ties to the state. As people beg the state for more regulation, real free enterprise solutions, like legal weed, are being ignored, or worse, prosecuted.

Until this paradigm of government and pharmaceutical collusion and the war on drugs comes to an end, we can only predict that this epidemic of mass opioid overdoses to get far worse.