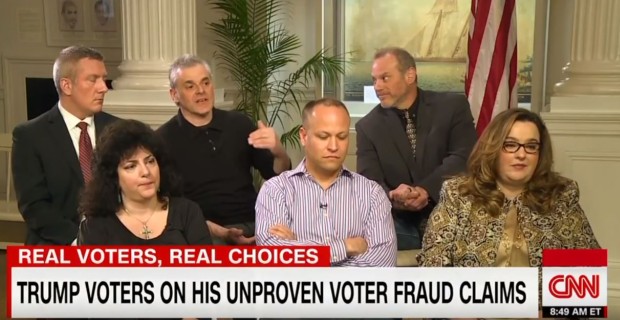 California refuses to comply with Trump investigation into illegal voting

CNN has been caught deliberately editing out eyewitness testimony of vote fraud as California refuses to comply with a Trump administration investigation into how many illegal aliens voted in the presidential election.

In James O’Keefe’s latest bombshell, he reveals how Project Veritas was sent the full hour and a half audio from a CNN public forum hosted by Alisyn Camerota about Donald Trump’s first 60 days in office.

The eight minute segment that was aired on March 30 included forum member William Baer saying that he personally witnessed people being bussed in to vote on election day, but the segment went on to portray the man as a conspiracy theorist.

CNN caught editing out poll watcher's eyewitness testimony of voter fraud to characterize him as a conspiracy theorist. @JamesOKeefeIII pic.twitter.com/6vyY3MX3DF

However, the part CNN omitted included Baer mentioning James O’Keefe exposing how it was simple for anyone to vote illegally as well as his own eyewitness testimony when Baer stated, “I was actually a poll watcher in New Jersey and I saw what was going on there,” before he goes on to describe how he saw students voting without proper ballots.

“At the moment Baer is about to cite the evidence to support his claim, CNN ends the clip,” comments O’Keefe, adding, “The piece suggests that Baer did not have a legitimate answer to Camerota’s question – in actuality the answer was cut because it didn’t fit their narrative – this is a textbook lie of omission.”

The clip was featured in part 3 of O’Keefe’s ‘American Pravda’ series, which also showed a CNN producer revealing how 90% of the people at CNN thought Americans were “stupid as shit”.

Meanwhile, California Secretary of State Alex Padilla has refused to comply with President Donald Trump’s voter fraud commission that is investigating how many illegal aliens voted in the presidential election.

“Padilla said Trump’s voter fraud commission’s request of personal voting data on every American voter “is a waste of taxpayer money” that aims to ratify a false claim that millions voted illegally,” reports the Huffington Post.

How can Padilla assert that the claim is false while simultaneously blocking an investigation that would determine whether or not it was false?

Trump was relentlessly attacked by the media after the election when he claimed that he would have won the popular vote if millions of illegal aliens hadn’t voted for Hillary Clinton.

Ever since then, Trump’s assertion that millions of illegals voted has been called a “fake news” conspiracy theory.

If it’s all just a conspiracy theory, why is California refusing to take part in an investigation? Something to hide?

As we reported earlier this month, a new study reveals that up to 5.7 million illegal immigrants were likely to have voted in the 2008 election, proving Donald Trump was right to have concerns and that a proper investigation is critical.