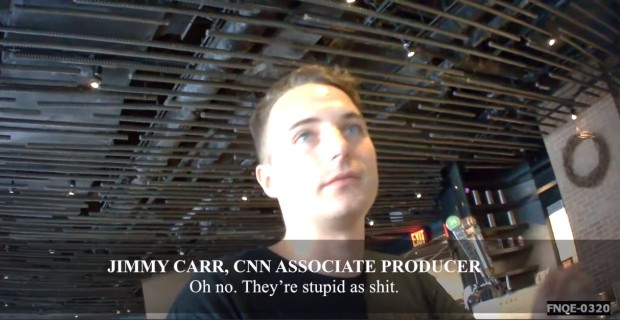 CNN producer Jimmy Carr summed up the attitude of the mainstream media towards ordinary people when he was caught on tape saying American voters are “stupid as shit”.

Asked whether it would be “fair to question the intellect of the American voter,” Carr responded, “Oh no, they’re stupid as shit.”

Carr goes on to acknowledge the deep bias that prevails within CNN, labeling President Trump a “clown” and “fucking crazy” while asserting that Kellyanne Conway “looks like she got hit with a shovel.”

According to Carr, 90% of people within CNN share these beliefs.

Earlier this week, CNN’s Brian Stelter blamed Infowars for “hatred and resentment” being stirred up against CNN and the news media in general.

When your own producers think the American people are “stupid as shit” and admit that this is the consensus view within CNN, how much of that hatred and resentment is earned?

Carr’s comments about Kellyanne Conway also underscores the rampant hypocrisy of the media to bash Trump for making fun of Mika Brzezinski’s appearance when leftists reserve their most vile and vicious personalized hatred for conservative women.