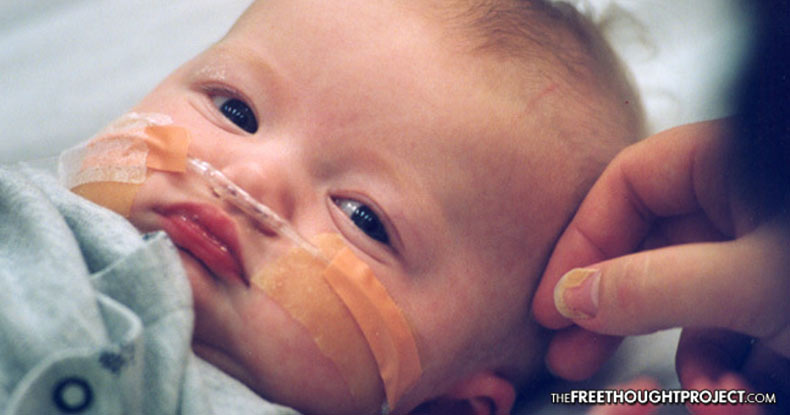 When the parents of 10-month-old Charlie Gard raised more than £1.3 million in an attempt to save their critically ill son, they had no idea that the European Court of Human Rights would be the only thing standing in the way of pursuing further treatment.

Gard suffers from mitochondrial depletion syndrome, a rare genetic condition that has caused serious brain damage. After British doctors determined that he was beyond saving and should “die with dignity,” Gard’s parents appealed to both the United Kingdom’s Supreme Court and the ECHR in France, and received the same answer.

Chris Gard and Connie Yates set up a GoFundMe account for their son, in which they explained that because Charlie is the 16th person in the world to have ever been diagnosed with the condition, they have found an experimental treatment that is only available in the United States.

“Charlies condition is caused by a disruption in the mitochondria, the part of the cell that provides energy to his muscles, kidneys and brain. There is a new treatment available which is a nucleoside bypass therapy, which could potentially repair Charlie’s mtDNA and help it synthase again by giving him the naturally occurring compounds that his body isn’t able to produce. It’s oral medication so nothing invasive or harmful. We are running out of precious time with our baby, he can’t have this treatment in the UK so our only hope now is to get Charlie to America.”

Despite the fact that Charlie Gard’s parents succeeded in raising more than the £1.3 million they were seeking, in an attempt to pay out of pocket for their son to receive treatment in the U.S., the UK’s healthcare system left the ultimate decision up to the government.

The European Court of Human Rights released a statement that not only rejected the appeal to let Gard’s parents seek out additional treatment independent of state-funded healthcare, but also stated that it is lawful for Gard’s doctors to take him off of life support when they choose.

“The decision is final,” The statement said. “The domestic courts concluded that it would be lawful for the hospital to withdraw life sustaining treatment because it was likely that Charlie would suffer significant harm if his present suffering was prolonged without any realistic prospect of improvement, and the experimental therapy would be of no effective benefit.”

During the UK Supreme Court hearing, Gard family lawyer Richard Gordon QC raised the question of the level of involvement the government should have in determining a child’s right to live, as well as the rights of parents to seek alternative treatment that could save their child.

“The issue is whether the state has the power to intrude on decisions the parents have made in order to mandate that child’s death before it might come to an end,” Gordon said. “These are model parents trying to do all they possibly can for the benefit of their child. Their view on what is best for Charlie differs from the court.”

The fact that the final decision comes at the hands of a court under the name of “Human Rights,” serves as a reminder that government involvement is never the answer, and in this case, it is in opposition to over 83,000 people who have pledged in support of a giving a baby boy the opportunity to have a second chance.