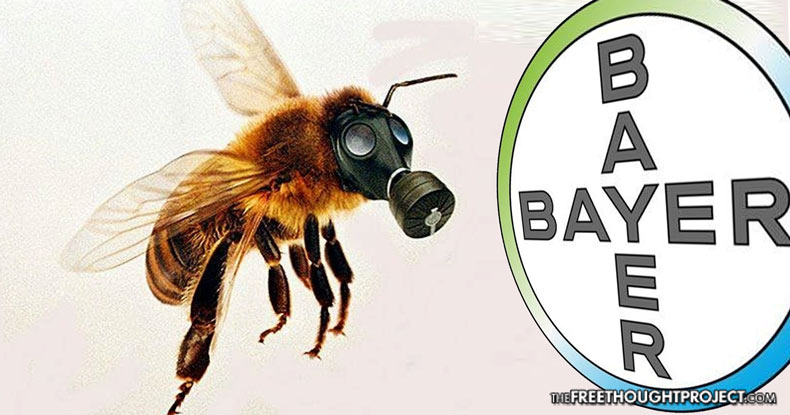 A large-scale study on neonicotinoid pesticides is adding to the growing body of evidence that these agricultural chemicals are indeed harming bee populations. Carried out at 33 sites in the United Kingdom, Germany and Hungary, the study found that exposure to neonicotinoids “left honeybee hives less likely to survive over winter, while bumblebees and solitary bees produced fewer queens.”

Bayer and Syngenta, makers of “neonic” pesticides who stand to reap massive profits if Europe lifts the neonic ban, promptly disputed the researchers’ conclusions—even though they partially funded the study.

The authors note that this is the first real-world experiment demonstrating direct causation between neonics and reduced bee populations, and is consistent with other findings.

According to the study abstract:

“Winter-sown oilseed rape was grown commercially with either seed coatings containing neonicotinoids (clothianidin or thiamethoxam) or no seed treatment (control). For honey bees, we found both negative (Hungary and United Kingdom) and positive (Germany) effects during crop flowering. In Hungary, negative effects on honey bees (associated with clothianidin) persisted over winter and resulted in smaller colonies in the following spring (24% declines). In wild bees (Bombus terrestris and Osmia bicornis), reproduction was negatively correlated with neonicotinoid residues. These findings point to neonicotinoids causing a reduced capacity of bee species to establish new populations in the year following exposure.”

Negative effects on bumblebees and solitary bees were observed in all three countries, where higher concentrations of neonicotinoid residues in nests resulted in fewer queens. Harmful effects were found on honeybees in the U.K. and Hungary, which is consistent with observations of high hive mortality in the U.K. and a 24 percent decrease in colonies in Hungary.

However, no harmful effects were found on overwintering honeybees in Germany. This relatively small subset of the study’s findings was pounced on by Bayer and Syngenta to claim that their products are safe for bees, or the results are inconclusive. The two companies make the neonic pesticides used in the study.

“We do not share the Centre for Ecology and Hydrology’s interpretation that adverse effects of the seed treatments can be concluded from this study, and we remain confident that neonicotinoids are safe when used and applied responsibly,” said Dr. Richard Schmuck, environmental science director at Bayer.

It should come as no surprise that the makers of an agricultural pesticide worth billions of dollars would seize on the smaller part of a study to push doubt in the public mind. The scientists who actually performed the study provide a different interpretation—one based on the entire body of evidence.

“Our findings are a cause for serious concern,” said study author Richard Pywell of the Centre for Ecology and Hydrology in Oxfordshire. “We’ve shown for the first time negative effects of neonicotinoid-coated seed dressings on honeybees and we’ve also shown similar negative effects on wild bees. This is important because many crops globally are insect pollinated and without pollinators we would struggle to produce some foods.”

The data will be studied as part of an assessment due in November to the EU, which will decide whether to keep the neonic ban in place. The BBC reports that the EU is “working on new draft proposals to extend the ban on neonicotinoids.”

To illustrate the complex nature of the problem, as neonics have been banned since 2013, some European farmers are spraying larger quantities of other pesticides such as pyrthroids, which may be doing its own harm to bees and beneficial insects.

There certainly is a need for pest management in agriculture, but what cost is the chemical approach exacting on the natural environment and honeybees that pollinate our food crops? The evidence on neonics says bees are highly sensitive to these chemicals, but farmers also need alternative solutions.

To address the issue, we must consider how we got here. Pests have been introduced all around the world by hitching rides on human ships and other vehicles. Pests often find their new locations devoid of natural predators that would normally keep them under control.

This ever-growing dependence on chemicals, which threatens natural ecosystems and human health, is highly profitable to companies like Bayer and Monsanto.

Holistic, non-toxic solutions face stiff odds against billion-dollar interests of corporations like Bayer who won’t hesitate to deny scientific conclusions, even from studies funded by Bayer.