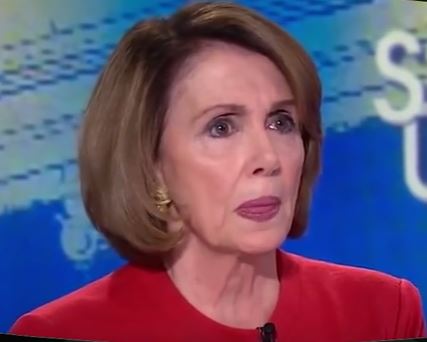 On June 25, 2017, appearing with MSNBC’s Joy Reid at Manhattan’s Jewish non-profit community-center 92nd Street Y, looking gaunt and sunken-cheeked, Pelosi struggled to communicate, gesticulating wildly and futilely with her hands, repeatedly stopping in mid-sentence and staring at the audience in brain freezes.

“He was part of, part of a group called the Berkson Group, and they did rallies and pageants and parades and um, and when he stood up on the floor of Congress, ‘I stand here as a representative … of the . . . [brain freeze] members of the Jewish army,’ and he was really way out there….”

Then, on the subject of the GOP’s health care reform bill, Pelosi said:

“Now we are building and validating what really is the message, that as we go for it, you probably could put it on a piece of paper right now and say this is what it should be. For us, we have to make sure that our members [brain freeze] participate in that. At least go to Facebook, Twitter, whatever . . . [brain freeze] Instagram, any platform that you want. Home care to, you know, some people are at home, but they still get care from, from . . . [brain freeze] Medicaid low income seniors in nursing homes are getting care at home, it, it will a tremendous impact on what families can do for their children, the, the [brain freeze], in relationship to what they need to do.”

Did you understand any of that?

Here’s another video of Pelosi lying, being incoherent, and slurring her words:

And once again, the tongue thing.