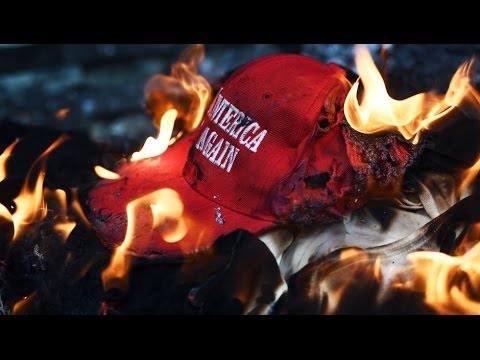 AUSTIN, Tex. (INTELLIHUB) — Thousands of left-wing radicals plan to kick off a ‘summer of rage’ on July 2 in cities all across America with their so-called ‘Impeachment March.’

The George Soros-backed group of snowflakes, who mostly live in their mother’s basement, claim that Donald Trump has been in violation of the U.S. Constitution since the moment he took office and says that they are going to put a stop to it, once and for all.

“We cannot abide a Congress that turns a blind eye to the constitutional breaches of our Commander-in-Chief. We demand that Congress do its job and commence with impeachment proceedings immediately,” the Austin Texas faction’s website states. “On July 2, 2017 in Austin, Texas, we march in solidarity with Impeachment March across the country to demand the removal of Donald J. Trump from the office of President.”

The comunists claim that they have ‘grounds to impeach’ President Trump as pointed out in the following propaganda that’s posted to their official website ImpeachmentMarchAustin.org:

In his conduct of the Office of President of the United States, Trump in violation of his oath faithfully to execute the Office of President of the Unites States and, to the best of his ability, preserve, protect and defend the Constitution of the United States, and in his duty to take care that the laws be faithfully executed, has prevented, obstructed, and impeded the administration of justice in that he:

c.      Failed to provide information regarding General Flynn’s dealings with the Russians to the House Intelligence Committee.

(2) Violation of the Foreign Emoluments Clause Article I, Section 9, Clause 8

[N]o Person holding any Office of Profit or Trust under them, shall, without the Consent of the Congress, accept of any present, Emolument, Office, or Title, of any kind whatever, from any King, Prince or foreign State.

Inconsistent with the practice of all modern era Presidents and the expectations of the public, he has refused to place his business assets into a blind trust in which he would have no control over the assets and decision making of his businesses, but instead, directly and/or through his family continues to control his businesses and receive business revenues. The single largest tenant of Trump Tower is the Industrial and Commercial Bank of China, a wholly state-owned company. The Abu Dhabi Tourism & Culture Authority office holds a lease with Trump Tower. Foreign diplomats and foreign embassies routinely hold events at Washington’s Trump International Hotel. More than an obvious conflict of interest, receipt of any monies by him or his businesses under the control of him or his family from any foreign government or representative of a foreign government is a present or emolument in direct violation of the United States Constitution.

Trump has financial relationships with businesses and governments throughout the world, including Turkey, the Philippines, India, Great Britain, Saudi Arabia, Dubai, Brazil, Bulgaria, and Viet Nam. Most importantly, he has financial dealings with Russia and China, the extent of which are largely unknown and will remain so as long as he refuses to release his tax returns as has been done by all modern era Presidents, a promise upon which he reneged.

These conflicts of interest have not only enriched Trump, but have undermined our national security.

(3) Violation of the Domestic Emoluments Clause Article I, Section 9, Clause 8

The Constitution’s Domestic Emoluments Clause – also known as the Presidential Compensation Clause – is not waivable by Congress. It is designed to prevent corruption, as Alexander Hamilton wrote in The Federalist Papers No. 73: “Neither the Union, nor any of its members, will be at liberty to give, nor will he be at liberty to receive, any other emolument than that which may have been determined by the first act. He can, of course, have no pecuniary inducement to renounce or desert the independence intended for him by the Constitution.”

Furthermore, “emoluments” are not limited to monetary payments; they also include economically valuable favorable regulatory actions. President Trump’s control over the vast modern powers of the executive branch means that regulatory action affecting his businesses favorably constitutes an “Emolument from the United States.”

For example, President Trump’s ongoing lease of Washington, D.C.’s Old Post Office, in which the Trump International Hotel is located, violates an explicit clause in the General Services Administration lease contract providing: “No . . . elected official of the Government of the United States . . . shall be admitted to any share or part of this Lease, or to any benefit that may arise therefrom . …” His business arrangements have been announced (not including any divestment of the hotel) and he has assumed office, but the GSA is not pursuing any legal action to enforce the provision. Such favorable regulatory treatment provides President Trump a significant financial benefit from the federal government above and beyond his federal salary.

The communist oriented protest is scheduled to start at 9:00 a.m. at the Texas Capitol and in other locations in cities across the U.S.

Intellihub’s Shepard Ambellas will be on scene covering the event live.