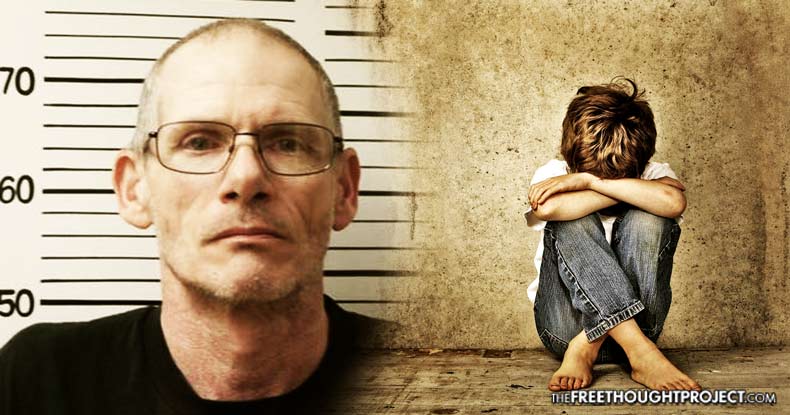 Lamoure, ND — Fifty-one-year-old Lamoure Police Chief James G. Watson has been arrested and charged with raping a child under the age of 15. While the small town police chief sits in jail awaiting trial, he’s still getting paid.

It’s safe to say most companies would have immediately fired an employee the very minute that worker got arrested — for raping a small child. But as The Free Thought Project has reported on numerous occasions, police officers often receive special treatment. Not only do they frequently get a slap on the wrist for serious felonies — such as Watson is alleged to have committed — but they often get to keep their jobs and their salary.

As Watson was testifying in a DUI case at the county courthouse, investigators arrested and charged him with numerous sex crimes against a child. He was charged with statutory rape and sexual abuse of a child in three different counties. The abuse is believed to have occurred from 2011 to 2013. According to the West Fargo Pioneer;

None of the published news stories give any indication as to the identity of the children but the charge of continuous sexual abuse seems to indicate the sex crimes were not random. Describing the severity of the abuse, Watson is accused of victimizing a child on a weekly basis over several years.

The abuse appears to have occurred when Watson was not a licensed peace officer. He did not graduate police officer training school until 2014, yet was subsequently hired with little to no experience in 2015 as LaMoure’s chief. Incidentally, he is the only police officer in the small town as well.

In recent history, it’s the town’s second catastrophic failure in hiring a police officer who would not abide by the same laws he was supposed to have enforced. In 2010, the former lone police officer, 22-year-old Kyle Mackey, was also embroiled in pedophilia. He pleaded guilty to a felony count of gross sexual imposition involving a 14-year-old girl.

In light of the recent arrest of the town’s only police officer, it may be time for LaMoure’s residents to take matters into their own hands and form a civil watch patrol. It seems they’d have better luck policing themselves than hiring pedophile cops.

The city’s attorney, Kim Radermacher, addressed the town’s concerns with reporters. “The city council this morning held a special meeting to discuss the status of this matter. There’s still so much that we don’t know at this point. So, under advice of counsel, they did place him on administrative leave with pay pending further investigation into the matter.”

Watson has been charged with a Class AA felony which carries a maximum penalty of life in prison without the possibility of parole. He currently sits in Stark County Jail awaiting trial.

According to WDAY News 6, which reviewed court documents, the accused pedophile police officer committed at least 50 sex acts against the child. Nevertheless, LaMoure citizens are having a hard time believing their chief could do such a thing.

Jessica Harris said her children are in the same grade as Watson’s. She told reporters;

The little interaction I’ve had with him, he’s always been friendly or helpful, kind…Everybody is in shock they don’t know what to think. You know, you don’t want to make any judgements until the facts come out…I’m sickened really. I’m the mother of 6 kids, I have grandchildren. And my heart hurts for the victim, for his children and wife. I couldn’t imagine even what they are going through.