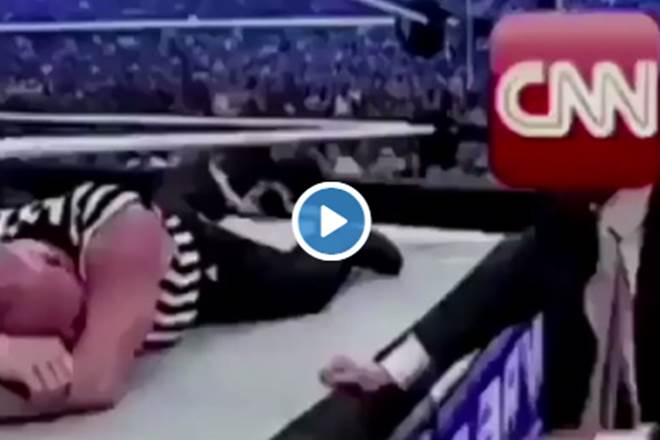 While we’ve come to expect totally transparent and unfiltered tweets from President Trump in recent months, his latest may be the trigger that drives liberals and their media cohorts into safe spaces across America.

After literally scores of fake news reports from CNN since the start of the 2016 election cycle in an attempt to denigrate Trump, the President has not only survived the onslaught, but thrived. In fact, every news story attempting to convince Americans of Russian ties, racism and a host of other half-baked allegations has only served to further empower the President and his supporters.

In response to the constant barrage from the establishment media, President Trump tweeted a video that completely sums up the body slam he’s put down on them thus far:

The video was taken from an actual Trump WWE (World Wrestling Entertainment) appearance.

And while common sense suggests it is nothing but a metaphor, kind of like when President Obama said that if Republicans ‘bring a knife to a gunfight, Democrats will bring a gun’, the left appears to see no humor in it.

In fact, every left-leaning media outlet on the planet is now suggesting that the President is calling for violent attacks on journalists:

President Donald Trump renewed his attacks on the media Sunday, tweeting a video that seemed to endorse violence against journalists.

Incitement of violence is *not* protected speech. This image/surrounding rhetoric ABSOLUTELY inspire violence. So, actually, it's not legal.

If someone hurts or injures or worse to a reporter, Trump is 100% at fault. There is no way around it. https://t.co/T5SDoPtM63

Now there is no denying who is promoting violence and brutality. This is a literally a direct assault on CNN reporters, producers staff. https://t.co/eLtWZVayUp

The President of the United States is encouraging violence not just against a reputed news channel, but the entire free media.

But then there’s the reality of it, summed up in the following Tweet:

CNN statement responding to the president: "We will keep doing our jobs. He should start doing his." pic.twitter.com/Gn1YRA2DRG

By “doing their jobs” we presume CNN means the continuation of fabricated “news” stories, biased reporting, and half truths.