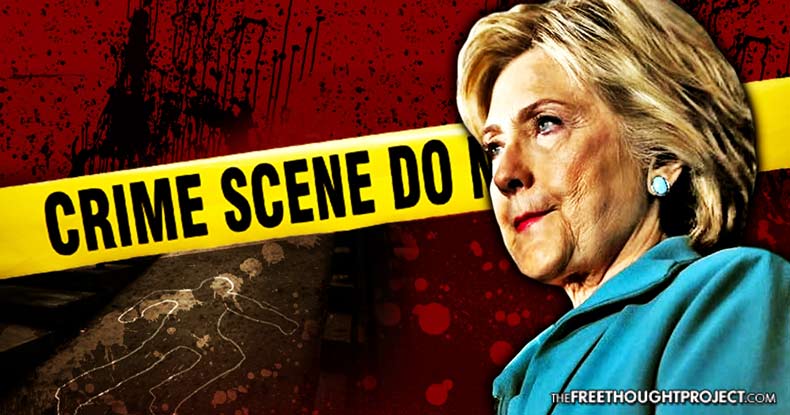 The fiancé of Chris Stephens, the U.S. ambassador to Libya who was murdered in the 2012 Benghazi attack, is speaking out about his death—and the cover-up that followed.

Lydie Denier appeared on Rick Amato’s “Amato Talk” with Will Craddick, founder of DisobedientMedia.com, to discuss the controversial lawsuit against the Democratic National Committee, in which “one witness has died and another potential witness was murdered.”

As The Free Thought Project has extensively reported, influential donors to the DNC are suing their political party for fraud in the 2016 presidential election where they say their candidate, Vermont Sen. Bernie Sanders, was discriminated against. High-ranking members of the DNC, by way of Wikileaks’ DNC email publications, were caught favoring Hillary Clinton over Sanders and actively working to subvert his chances at winning the party’s nomination.

Several individuals close to the lawsuit have turned up dead, and many more plaintiffs have filed grievances with the court, asking for special protection under the law. They point to threats, intimidation and breaking and entering of their homes as proof the defendants will go out of their way to make sure that the lawsuit does not proceed.

Now, as those of us in the alternative media are pointing out, there has been a corporate media blackout of this information.

“The DNC did actually violate their own by-laws, which state that they are supposed to choose the candidate in an impartial manner, even though they’ve actually turned around and argued in court that they’re actually not required to do that,” Craddick stated with incredulity.

Craddick referred to the current issues within the DNC as a “pandora’s box” that has resulted from officials working to keep information from being leaked to the public. “There’s going to be a whole bunch of other issues that are uncovered as well—foreign influence in American politics, espionage, things of that nature,” he said.

Amato intimated all of the aforementioned issues had something to do with the Benghazi Attack, which resulted in Stephens’s death. His fiancé agreed.

“I got lots of emails from people saying, ‘There were 47 deaths that the Clinton’s are involved with. Be careful not to become number 48,’” Denier said. “Definitely, when you start telling the truth and you start to uncover … you have to be so careful.”

In the same way that the attempts to suppress the truth have been used on the DNC lawsuit, Denier said that method was used in the aftermath of the Benghazi Attack. From rumors that the attack stemmed from anti-Islamic propaganda on YouTube to rumors that Stephens was sent to die because he was killed, Denier said they were all false.

“They said it was Chris’s fault that he died because he didn’t want security, when in reality, within six weeks, he asked over 600 times for more security,” Denier said. “And then he died, and it’s like nothing happened.”

“Don’t believe them, no, don’t believe them!” Denier said, in reference to the mainstream media’s narrative. The would-be-widow wrote a book entitled, “A Voice for Ambassador Chris Stephens,” where she goes into much more detail about her late fiancé’s death.

Questions remain as to whether full transparency in the deaths of Stephens, Seth Rich and others who have died in relation to the Clintons will ever come to light. Were they killed in an attempt to cover-up an entire political party’s misdeeds?

Were they, as Denier alleges, more Clinton bodies? These questions and more have yet to be answered, highlighting the importance of a lawsuit against the DNC that has the hope of bringing answers to the questions grieving loved ones are asking.

As for Stephens’s fiancé, she appears convinced the Clintons had something to do with his death, and she is not staying silent.