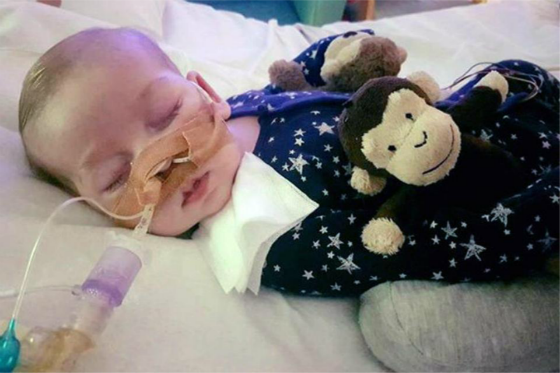 As humans across the globe line up in support of government-run health care, many others have taken pause by the incident involving the United Kingdom baby, Charlie Gard.

Charlie has a rare genetic condition and brain damage and his parents, Chris Gard and Connie Yates, are expecting the life support to be turned off on Friday, per government edict.

The contentious issue has been covered by several publications, describing the court as a “death panel”, which they have proven themselves to be by sentencing the baby to death. Right-wing commentator Paul Nehlen accurately described the case as “further proof that socialism kills“. But in a moment of compassion, the president of the United States is offering to help.

If we can help little #CharlieGard, as per our friends in the U.K. and the Pope, we would be delighted to do so.

Charlie cannot see, hear, move, or cry and has been receiving treatment since last October. But his mother, Ms. Yates, has raised money for his treatment through a crowdfunding website. She said that the crowdfunding money would go to a charity for mitochondrial depletion syndrome if Charlie was not able to benefit from the funds.

Nothing in there changes a thing. The COURT ruled Charlie's parents cannot take him to the US for treatment.

The courts ruled that Charlie’s parents could not seek treatment in the United States, so it’s hard to say if they would be allowed to do so now that the president has offered.

What exactly gives the government in the UK the power to decide how parents should treat their children and who should live or die? Well, government lovers, of course. Whether you love Donald Trump or hate him with a burning passion, his kindness and respect for life in this situation has shown through.  The world could use more compassion, and although we at The Daily Sheeple are often harsh on Donald Trump when he deserves it, he has earned a pat on the back for extending his hand to parents whose world is crumbling thanks to the court-ordered death of their son.