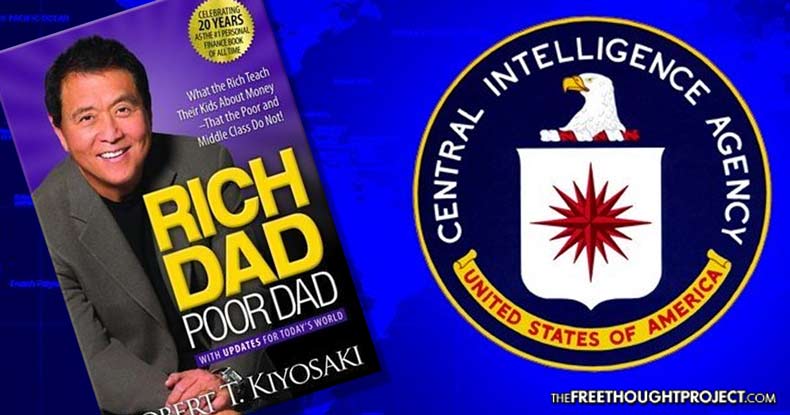 Best-selling author Robert Kiyosaki, best known for his book “Rich Dad, Poor Dad” recently revealed that he was offered to smuggle drugs for the US government while he was working for the military during the Vietnam war. Kiyosaki mentioned this fact during a recent conference in Bozeman, Montana, and then later clarified his statements in an interview with Millie Weaver.

In the years since the war ended, it has been thoroughly documented that large shipments of heroin were coming from the region in and around Vietnam, and that those shipments were either protected or smuggled directly by individuals working with the US military. During the Vietnam War, the area surrounding Vietnam and Laos was known as “The Golden Triangle,” a hotbed for heroin production.

As The Free Thought Project has reported, drugs were transported on military aircraft and brought back to America, where they were eventually sold to the mafia and distributed on the streets. Now the Golden Triangle has taken a back seat to the “Golden Crescent,” which refers to the area in and around Afghanistan, a region that the US military is currently occupying.

In his youth, Kiyosaki was fighting in Vietnam with the US Marines and was offered to fly airplanes for the CIA front company “Air America,” which was used to import and export drugs. Kiyosaki was informed by other marines that Air America was used to smuggle drugs, and that it could be an opportunity for him to make a lot of money. However, he resisted the temptation and declined the offer because he did not feel comfortable being a drug runner.

“In 1973 I was a Marine lieutenant, I was a pilot flying helicopter gunships in Vietnam and I was about to rotate home and an organization called ‘Air America’ approached me and wanted to know if I would fly for them,” Kiyosaki said. “The offer was pretty good, it was a long time ago but I think it was about $80,000 per year which was a lot of money back then for a 25-year-old kid. I didn’t know what Air America was, and then I just got the ‘nod nod wink wink’ that you could make a lot more money if you ran special packages. I didn’t know what they were talking about but my friends were just hitting me saying ‘you idiot, don’t you know what they are talking about?’ Later on, I discovered it was to run intoxicants out of Laos and the Golden Triangle.”

“I don’t do drugs, I have tried marijuana and I’ve tried cocaine but I don’t do drugs, and I don’t care how much money I make, I won’t run drugs, so I’m glad I didn’t take up the offer,” he added.

Air America was dissolved on June 30, 1976, but then was subsequently renamed “Air Asia” and purchased by Evergreen International Airlines. Over $20 million in profits from the sale were quietly transferred to the US Treasury.

However, government-sponsored drug trafficking did not stop with Air America, as there have been multiple incidences proving that these operations are still taking place.

READ MORE:  Court Rules Shooting ‘Upskirt’ Pics of Women is Legal in Public — Still Throws You in a Cage for Pot

In September 2007, a CIA jet crashed in Mexico with 3.2 tons of cocaine onboard. The jet was on its way from Bolivia when it was spotted by Mexican helicopters that followed in pursuit. The chase resulted in the crash of the jet and the seizure of the cocaine. Upon inspecting the wreckage site, the Mexican authorities found no body or survivors but did find several thousand pounds of cocaine. The serial numbers on the plane were eventually traced back to a company that transported terrorists for the US government.

This story is not uncommon, there have been many cases where government planes have crashed in South and Central America with tons of illegal drugs onboard. On April 10, 2006, Mexican police seized a DC-9 aircraft that was carrying 5.5 tons of cocaine, flight records showed this aircraft to be another CIA “terrorist transport” plane that was used to transport drugs. The pilot of the DC-9 aircraft also managed to escape from Mexican authorities.

John Vibes is an author and researcher who organizes a number of large events including the Free Your Mind Conference. He also has a publishing company where he offers a censorship free platform for both fiction and non-fiction writers. You can contact him and stay connected to his work at his Facebook page.John is currently battling cancer naturally, without any chemo or radiation, and will be working to help others through his experience, if you wish to contribute to his treatments please donate here.