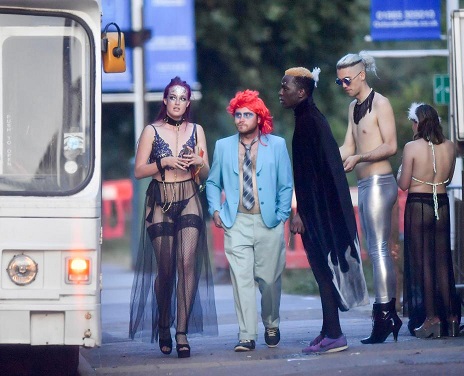 As described by the UK newspaper, The Guardian, the Piers Gaveston is a “highly exclusive” men-only club, made up of a self-selecting group of 12 undergraduates. Named after the alleged male lover of Edward II, king of England from 1307 to 1327, the Society was founded in 1977 and carries the Latin motto “Fane non memini ne audisse unum alterum ita dilixisse” or, in English:

“Truly, none remember hearing of a man enjoying another so much”

Like its namesake, Piers Gaveston encourages and indulges in what The Mail describes as “excess, high camp [and] ostentatious decadence” and prides itself on being a clandestine organization. Its members are given obscure titles such as “Poker”, “Despenser” (Hugh le, Earl of Winchester, a favorite of King Edward II), and “Catamite” (a boy who has a sexual relationship with a man), who all observe the Sicilian code of Omertà, maintaining silence about the club.

Every year, Piers Gaveston holds a summer ball, described by the Telegraph as parties where “Cross-dressing is as likely to feature as speed-laced jelly. The rules are simple – there are none.” Each member invites 20 guests – preferably more women than men. The invitees are given 72 hours’ notice and told to turn up for a hired coach that would drive them to an undisclosed destination in the countryside.

Rob Pattinson, Andy Crick and Ben Perrin report for The Sun, July 1, 2017, that “posh” (upper-class) half-naked students were seen queuing up to board the bus to this year’s £90-per-head ball Piers Gaveston summer ball held in a remote field — the females wearing only nipple tassels and body paint, the men in high heels.

Reportedly, “revellers” at the ball fornicated a goat. A poster on student gossip page Oxfeu wrote:

“Shoutout to those at Piers Gav who decided to f*** a goat — great to know Oxford remains a bastion of intellect.”

“Oriel blonde in the pink skirt: why did you reject me at gav? You are the reason I went and yet you refused to join me in the sex tent.”

Piers Gaveston past members include movie actor Hugh Grant and former UK Prime Minister David Cameron who took part in an initiation ceremony in which Cameron screwed a dead pig’s mouth, according to an unofficial biography of Cameron written by Conservative donor Lord Ashcroft who claims to have photographic evidence. (The Guardian)