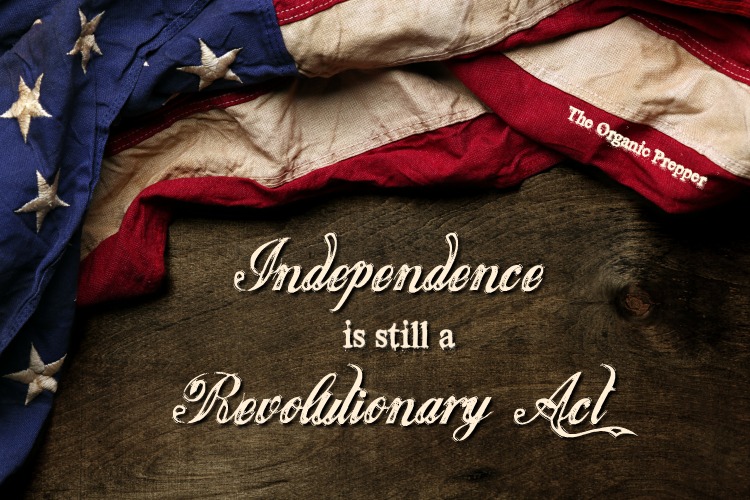 Independence is about a whole lot more than firing up the barbecue, drinking some beer with friends, and shooting off fireworks. It’s about more than blindly waving a flag.

It’s about the way we live our lives every single day. And 241 years later, independence is still the most revolutionary act you can commit.

Now, regardless of how you feel about this administration or the previous one, I think we can all agree that many of the liberties our parents took for granted are now in trouble.

Real liberty is up to you. Use it or lose it.

Many Americans are completely dependent upon the work of others to survive.

I’ve often written about how we’ve become a nation of consumers instead of a nation of producers, and with that decline in productivity, we have lost much of the freedom we once treasured.

This is because they are not independent. They are the opposite of that – they’re dependent.

And yet, they comply. They truly believe that this is what freedom looks like. When they lose freedoms they comfort themselves with, “This is the price we pay to live somewhere safe and civilized.”

How far we have sunk…

How distant we’ve ventured from those original settlers who said, “No more!” and declared their freedom. They fought and sacrificed to be free of a government that oppressed them, taxed them, stole from them, and enforced rules without any type of representation upon them.

And yet here we stand on July 4, 2017. We have somehow forgotten what freedom really means and so we have lost it, incrementally and for many people, voluntarily.

The rights that were demanded 241 years ago when the founding fathers signed the Declaration of Independence have been systematically crushed “for our own good.” We’re being oppressed and stolen from. Rules are being enforced on us without representation. Because let’s face it, the only people that most of our members of Congress are serving are the ones lining their pockets.

We are taxed unreasonably, and if we don’t pay, they will take the money right from our bank accounts or steal our possessions.

In many states, we must ask for permission to catch a fish, drive a car, own a gun, or build an extra room onto our homes, just to name a few.

Permits and licenses are big revenue generators from start to finish – and if you proceed without asking permission, they will extort more money from you in the form of fines. If you refuse to pay the fines (or if you can’t) they’ll kidnap you and lock you in a cage, where you’ll be forced to perform manual labor for 10 cents an hour for whatever length of time the legal authorities feel is sufficient to teach you a lesson.

Then there’s civil asset forfeiture. In many instances, without due process or a trial, our possessions and money can be taken from us on the “suspicion” that they are the benefits of some crime we haven’t been convicted of.

We’re unable to voice our opinions without incurring the wrath of so-called social justice warriors, who perhaps once actually meant well in an idealistic kind of way, but now just want to silence everyone with a dissenting opinion.

Every time a bad act occurs, people plead to give away even more of their freedom because they believe it will make them safer.  They are willing to be fondled and naked-body-scanned by the TSA in order to board a plane. They want to make a phone call and wait for the police to save them instead of picking up their own firearm and refusing to be a victim. They want to be surrounded by gun free zones, rainbows, and armed guards instead of taking responsibility for their own safety.

People believe that they must go and vote and choose “the lesser of two evils” in a presidential election that has been shown to be a sham directed by the media and social networks.  Why must we choose between evils? Are there really no good people in America that could take on that office? Perhaps the candidates we get are the candidates we deserve when we refuse to demand better.

Somehow, this land of rugged individuals has become largely populated with scared children, who expect to be cared for, fed, protected, and made to feel good about themselves, all by government mandate. Many people seem to have no desire whatsoever to earn their keep, provide for their families, or take responsibility for their own safety. They expect the workplace to be one of sunshine and lollipops, with ample time off, equal pay for all, and. don’t forget, lots of kind words for everyone.

Our culture is just so incredibly dependent.

And to some extent, we, the rugged independents who are left, have let this happen because the dependents are louder than us.

Freedom is terrifying to most people because it means that they and they alone, are responsible for the actions that they take. An independent person succeeds or fails on his or her own merit. Independence by its very nature means that the possibility of failure exists. It requires a sense of adventure, confidence, and the ability to fail and get right back up again, and it seems like these things are being bred out of the American people.

Whether you call it freedom, liberty, sovereignty, or self-governance, the point remains the same: if you’re reading this, you probably want to determine your own life, whether the result is success or failure. You want to have control over your ability to live, truly live, and not merely exist as a slave to the powers that be.

There actually is something we can do.

We can say no.

We can be the squeaky wheel.

We can be louder than those dependent, noisy individuals who want to throw away liberty. We can.

You may feel like you aren’t in the right place in life to declare your independence. Perhaps you don’t have room to raise your own food. Perhaps you have a physical handicap that bars you from living 30 miles from civilization in a yurt located down a dirt road, over a creek, and in the woods. Maybe it’s all you can do financially to keep the refrigerator full of groceries for the week.

But wherever you are right now, that’s okay. Wherever you are, know that every single person, even the very free-est person you know, started at a place that was less free than where they are right now. The most important thing is to begin to recognize the chains that are on you so that you can begin, link by link, to break them.

How do you break free of the life that nearly every single person around you lives?

It’s simple, yet so complicated.

Here it is, the ultimate act of revolution.

It is so very simple.

You have to need less.

When you need less, you have less to fear.

Now, every year when I write about this topic, a few people come out of the woodwork to claim, “It’s not enough.”  Not everyone is a warrior, but taking steps to become freer than you were the day before is a cause for celebration.

It is simply reality that most of us cannot make a stand in every single aspect of our lives. We have children that could be taken away from us. We have homes that could be seized. We fear being imprisoned in a cage. I get that, truly. I don’t want to lose my daughter or my home or be thrown in jail either. The folks in control have done their job in that respect, but we can work around it.

We can refuse to eat the poisoned apple that they graciously hand to us. We can stop sending their children to public school for “free” education.We can all stop purchasing processed food that originated as the bastard child of factory farming and a chemistry project. We can refuse to shop at Wal-Mart, K-mart, or any of those corporate discount stores that have their products manufactured in sweat shops overseas so that they can undercut the Mom & Pop stores right out of business.

Every single day, I strive to reduce my vulnerability to coercion.  Because, the less I need, the more difficult I am to manipulate.

You don’t need this stuff they are offering, either. There is so much that you can do to free yourself from them.

You have a natural human right to be free.

This freedom is also supposed to be protected by our Constitution, which gets undermined on a regular basis. If you aren’t free, then revolution is your duty. Part of the power that the government holds over people is the fact that they hold the keys to the stuff we need. So, true independence is not to need the stuff they have.  When there is nothing that you require enough to submit, then bullying you becomes much more difficult.

Make your life a declaration of independence.

Here are a few steps you can take to make yourself less dependent on the whims of the economy, the government, and corporate interests. Don’t worry if they seem impractical to you. They may not all be possible right this moment. Pick one and act on it, then another.  Every journey begins with the decision to start the trip.

The way you lead your life every single day can be a personal Declaration of Independence.

By refusing to concede your natural rights, quietly and resolutely, you are performing an act of revolution.

This only requires one thing: your consistent determination not to be infringed upon.

Make that decision today and you will really have something to celebrate on Independence Day.

Go ahead. Be free.