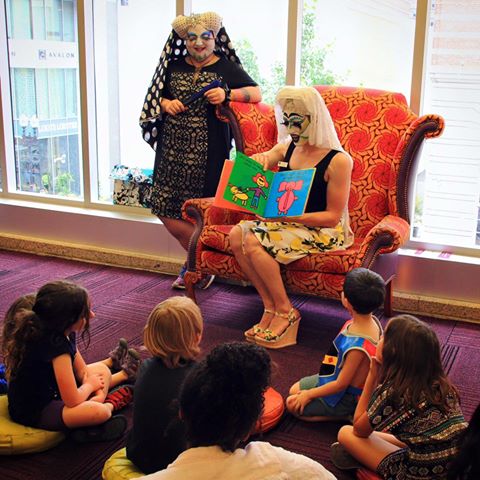 In continuing the push for the perverse in our society as some sort of “right” and “normalcy,” The Boston Public Library recently decided to invite two drag queens to host their children’s storytime.

In honor of homosexuals’ June “Pride Month,” (Bill Clinton was the first US president to honor June as “Pride Month”) the library allowed the “Sisters of Perpetual Indulgence,” which are men dressed in drag, to mock Catholic nuns for “Drag Queen Storytime.”

The Sisters of Perpetual Indulgence is also a non-profit group out of San Francisco. What in the world are they doing with a non-profit status?

Believing that guilt “chains the human spirit,” the group advocates that every person do whatever their passions dictate. It uses Christian terms and contorts them to mock the sacraments and church life in general, such as “Sister Inferior” and “Sister Hysterectoria.”

The men call themselves “queer nuns,” even though the anti-Catholic group is openly devoted to promiscuity. Their slogan is a ridicule of Jesus’ words to the woman caught in sexual sin. Instead of “Go, and sin no more,” the men “queers” have created their trademark slogan as, “Go forth and sin some more!”

ChurchPop summarizes the focus, goal, and purpose of the male queers as “essentially an inverted mockery of Catholic religious life for the purpose of promoting sexual perversion.”

The Boston Public Library not only championed the queer group, but promoted their brand of anti-Christian bigotry to the youngest of impressionable children. The Boston Children’s Library promoted the self-described queers’ visit on Facebook as well, posting, “Let’s end Pride Month with a drag –Drag Queen Storytime, that is! Join us on Thursday, June 29th at 3:30 for another visit from the Sisters of Perpetual Indulgence.”

Reaction on Facebook was not positive. The group defends its brand of blasphemy as “irreverent wit,” but faithful Catholics consider it blatant “hate speech.”

After the posting on June 29th on Facebook, the reaction was mixed. Almost 700 comments were made with 813 shares and nearly 2,000 reactions.

Melanie Vargas wrtoe, “How stupid. What kind of parent would even take their kids?”

Robert Manor commented, “I couldn’t imagine going to this as a kid I would of definitely felt awkward in that room.”

Tom Richards had a very good insight to children being in attendance at this perversion. “It was an event at the public library,” he wrote. “Do you think these kids wandered there on their own? Probably not, their parents took them. So all these comments are judging the parenting skills of some Bostonians. Isn’t it evident by the mere presence of Red Sox fan base that parenting skills in the greater New England region are suspect?”

“I mean, parents have a choice of whether or not they bring their kids to it so…