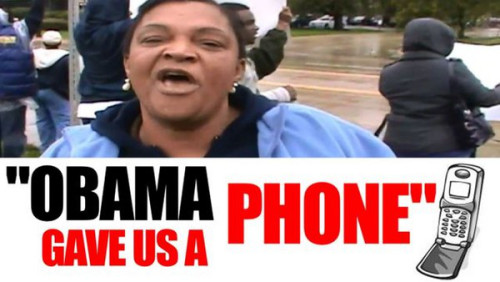 The Federal Communications Commission (FCC) has a welfare program called Lifeline, popularly known as Obamaphones, which provides discounts to eligible low-income households for home or wireless telephone and, as of December 2016, broadband service. Administered by the not-for-profit Universal Service Administrative Company (USAC), Lifeline disbursed about $1.5 billion in subsidies to 12.3 million households in 2016.

The subsidies are paid for by all of us via a fee charged on our telephone bills.

While the Lifeline program predates the Obama administration, having been created in the 1980s, it was vastly expanded under Obama.

Now, an investigation by the Government Accountability Office (GAO) found that as many as 36% — more than one in three — of those supposed low-income households given Obamaphones are actually of dubious qualification.

On June 29, 2017, the GAO released an 89-page report on its findings, titled Telecommunications: Additional Action Needed to Address Significant Risks in FCC’s Lifeline Program. Here are some highlights:

(1) To begin, although the GAO recommended that the FCC conduct an evaluation of its Lifeline program more than two years ago in March 2015, the FCC has not done that. In a July 2016 Order, the FCC finally announced its plan for an independent third party to evaluate Lifeline’s design, function, and administration by December 2020.

(2) The Lifeline welfare program depends on a flawed system of over 2,000 phone companies, called Eligible Telecommunication Carriers, to (a) provide the discounts for the phone and broadband services, which Lifeline then reimburses; and (b) verify subscriber eligibility. But the GAO notes that “This complex internal control environment is susceptible to risk of fraud, waste, and abuse as companies may have financial incentives to enroll as many customers as possible.” The FCC says it will create a third-party national eligibility verifier by 2019 to determine subscriber eligibility.

(3) Given the Eligible Telecommunications Carriers’ self-interested, financial incentives to enroll as many customers as possible, it should not be surprising that the GAO investigation discovered that as many as 1.2 million — 36% or more than 1 in 3 — Lifeline recipients are not qualified for the Obamaphones. In the words of the GAO report:

“Based on its matching of subscriber to benefit data, GAO was unable to confirm to whether about 1.2 million individuals of the 3.5 million it reviewed, or 36 percent, participated in a qualifying benefit program, such as Medicaid, as stated on their Lifeline enrollment application.“

(4) Although all Americans with phone service are paying for the Lifeline program, strangely the Lifeline funds of more than $9 billion in net assets (as of September 2016) are in a private, non-government (i.e., outside of the Department of Treasury) bank account called Universal Service Fund (USF). The GAO points out at least two problems with this arrangement: