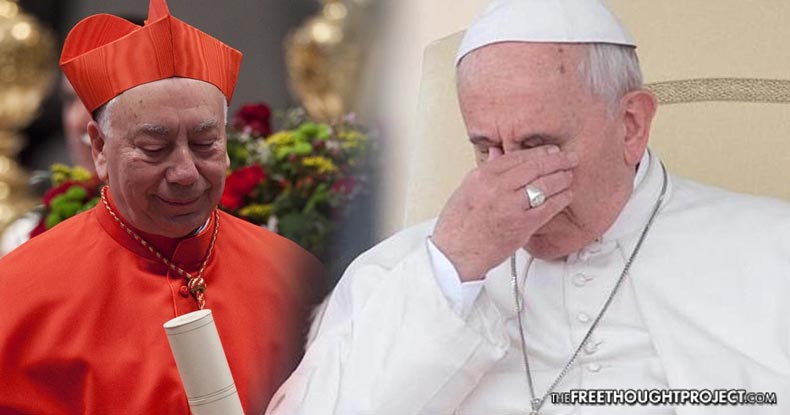 In 2014, Pope Francis admitted that “about two percent” or 1 in 50 Roman Catholic priests are pedophiles. He then promised solutions to the history of the church essentially condoning the horrid practice. However, in light of recent events, it appears the Pope is either unconcerned with or actually facilitating the abuse and hypocrisy of those within his holy ranks.

Within the last few weeks, scandal has plagued the Vatican as the third highest-ranking cardinal, George Pell, was charged with sex abuse against children in Austrailia. Now, on top of pedophilia, the Vatican can add drug running to its ever-expanding list of corruption.

The newspaper, Il Fatto Quotidiano — translated from Italian to The Face Daily — reported last week that Vatican police raided the apartment belonging to the Con­gregation for the Doctrine of the Faith. Ironically, that department is charged with, among other things, tackling clerical sexual abuse.

The occupant of the apartment is alleged by the paper to be the secretary of Cardinal Francesco Coccopa­l­merio, head of the Pontifical Council for Legislative texts and a key adviser to the Pope.

Coccopalmeria had reportedly just recommended the secretary, who was charged with running drugs, be promoted to bishop. That promotion is apparently on hold at this time.

That being said, however, the hypocrisy of the church in this instance is rife and certainly warrants scrutiny. Moreover, the ages of those involved in the raid have yet to be disclosed and — given the sordid history of the Catholic church — to say there may have been children present is not an excessive assumption.

Also, as Il Fatto Quotidiano reported, the corrupt clergymen were able to use their church jurisdiction to transport drugs freely without worrying about the Italian police. The luxury cars driven by the traffickers all had license plates and official Holy See plaques that allowed them to move about freely without being worried about getting caught.

The alleged sex ring has been the subject of recent protests in the area by residents who say they heard and saw many unusual comings and goings of people at all hours of the night.

As the Pope preaches reform and claims the church is ridding itself of problem members, it appears, according to all the recent revelations, that the exact opposite is happening. And, it appears, that it may even be deliberate.

According to a recent report out of the AP, Pope Francis has quietly reduced sanctions against a handful of pedophile priests, applying his vision of a merciful church even to its worst offenders in ways that survivors of abuse and the pope’s own advisers question.

After observing the sheer number of recent alleged crimes committed by members of the church, the answer to that question could be quite simple; corruption within the church is so rampant that cover-ups have become the norm.