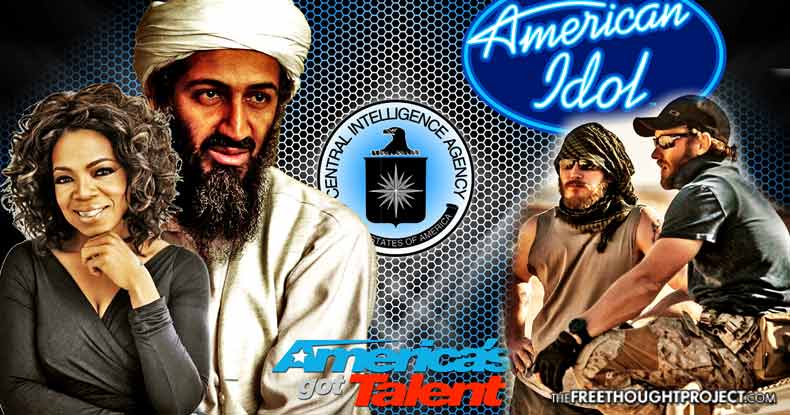 Hollywood magic doesn’t percolate only in the minds of legendary producers and acclaimed directors to be brought to life on the big and television screens where actors’ adept performances capture our imaginations; rather, if the plot pertains to the military, it’s more than likely the Department of Defense had a hand in the script.

From Meet the Parents and America’s Got Talent, to Cupcake Wars and Zero Dark Thirty — even Iron Man, Oprah, Patriot Games, and the James Bond thriller, Tomorrow Never Dies — if the production pertains to the War Machine or Surveillance State, it’s a veritable guarantee government significantly influenced the final product.

Censorship apparently reigns more supremely over Hollywood than we’d ever surmised — nearly 1,800 movies and TV shows have borne the fierce scrutiny of the eagle-eyed Pentagon and CIA.

In fact, according to documents obtained by Tom Secker and Matthew Alford for Insurge Intelligence, the DoD and CIA, and more frequently the NSA, don’t take kindly to portrayal in a negative light — even when that well-deserved derision and criticism covers past exploits long common public knowledge.

It may be better known how the Pentagon consults with Hollywood to ensure accurate portrayal of chains of command, military culture, proper use of equipment, and other obvious factors, but the DoD, it turns out, might as well pen the script — and, in many cases, that’s exactly what happens.

When applicable, films and television series must be rubber-stamped by the government — no seal of approval, no production.

Most often, DoD chief Hollywood liaison, Phil Strub, grants the ‘seal’ for productions where Pentagon guidance has been officially sought — anything amiss would require rewrites and adjustments to accommodate the military’s best interests. Instances where the two cannot come to agreement can mean scrapping the entire production — and it has happened before.

Secker and Alford — who obtained more than 4,000 documents pursuant to a Freedom of Information Act request, which admittedly are not included in the report — write:

“If there are characters, action or dialogue that the DOD don’t approve of then the film-maker has to make changes to accommodate the military’s demands. If they refuse then the Pentagon packs up its toys and goes home. To obtain full cooperation the producers have to sign contracts — Production Assistance Agreements — which lock them into using a military-approved version of the script.

“This can lead to arguments when actors and directors ad lib or improvise outside of this approved screenplay.”

Lest there be any doubt, the DoD’s weighty presence in filmmaking extends to the most picayune of details. Insurge Intelligence describes several instances in which one-liners and dramatic repartee the average moviegoer wouldn’t necessarily think twice about featured as the subject of bitter, behind-the-scenes quarrels pitting itinerant directors against the PR interests of the U.S. military — with the latter, one way or another, forever the victor.

Tomorrow Never Dies provides a sound example, telling of the Pentagon’s fastidiousness as it lords over the silver screen, but more so in the State’s desire to remain a surreptitious influence.

“When Bond is about to HALO jump out of a military transport plane they realise he’s going to land in Vietnamese waters. In the original script Bond’s CIA sidekick jokes ‘You know what will happen. It will be war, and maybe this time we’ll win.’

“This line was removed at the request of the DOD.

“Strangely, Phil Strub denied that there was any support for Tomorrow Never Dies, while the pre-eminent scholar in the field Lawrence Suid only lists the DOD connection under ‘Unacknowledged Cooperation’.

“But the DOD are credited at the end of the film and we obtained a copy of the Production Assistance Agreement between the producers and the Pentagon.”

So meticulous the world’s most gargantuan military, even the ostensively fictitious name of an operation to capture the Hulk in the eponymous 2003 movie had to be switched to “Angry Man” from “Ranch Hand” — because the latter “is the name of a real military operation that saw the US Air Force dump millions of gallons of pesticides and other poisons onto the Vietnamese countryside, rendering millions of acres of farmland poisoned and infertile.

“They also removed dialogue referring to ‘all those boys, guinea pigs, dying from radiation, and germ warfare’, an apparent reference to covert military experiments on human subjects.”

Past transgressions — no matter how publicly excoriated at the time — do not acceptable material for the Pentagon make. References to the Iran-Contra scandal ultimately sounded the death knell for a movie called Countermeasures, because, according to Strub in the documents,

“There’s no need for us to… remind the public of the Iran-Contra affair.”

Rather than risk summoning the specter of government indiscretion and corruption, production of Countermeasures ceased.

“The majority of the documents we obtained are diary-like reports from the entertainment liaison offices, which rarely refer to script changes, and never in an explicit, detailed way,” Secker and Alford write, adding so many documents remain undisclosed, it would be impossible to evaluate the extent of military censorship in Hollywood. “However, the documents do reveal that the DOD requires a preview screening of any project they support and sometimes makes changes even after a production has wrapped.”

Where the DoD issues official agreements with film production crews, the CIA exerts influence in an expectedly less formal manner through its entertainment liaison officer, Chase Brandon — who sometimes takes on quite more than an advisory capacity, even inserting himself at the foundational writing stages of the creative process. Insurge Intelligence continues,

“Brandon did this most prominently on the spy thriller The Recruit, where a new agent is put through CIA training at The Farm — an obvious vehicle for inducting the audience into that world and giving them a glimpse behind the curtain. The original story treatment and early drafts of the script were written by Brandon, though he is only credited on the film as a technical advisor, covering up his influence on the content.

“The Recruit includes lines about the new threats of the post-Soviet world (including that great villainous justification for a $600 billion defense budget, Peru), along with rebuttals of the idea that the CIA failed to prevent 9/11. And it repeats the adage that ‘the CIA’s failures are known, but its successes are not’. All of this helped to propagate the idea that the Agency is a benevolent, rational actor in a chaotic and dangerous world.”

Why all of this matters comes down to censorship and propaganda — these are top government entities privileged with unhindered access to Hollywood — the result amounting to pro-war American exceptionalism, bereft of wrongdoing anywhere on the planet, where past wrongs vanish and a U.S. agenda can do no wrong.

And that’s at least problematic.

Hollywood beckons those weary of ordinary life — wage slavery, debt, eviscerated freedoms — all of it, gone, for a pricey ticket. Perhaps the penultimate captive audience, moviegoers likely don’t realize — much less, care — about the involvement of the Pentagon or CIA if it contributed to realism in film.

Depicting conflict, war, and clandestine exploits in an heroic manner not only betrays the raw messiness of reality, but erases the fuzzy lines over which the military frequently leaps — the delineation obviating human rights abuse, war crimes, corruption, mendacity, and other indiscretion made couth through the magic of the silver screen. Sometimes, that deflection is accomplished through the vilification of single bad apples — Pentagon and CIA consultants proffer a single patsy for scorn in film — rather than risking their entire existence over bad PR, even when earned and well-known.

“This idea of using cinema to pin the blame for problems on isolated rogue agents or bad apples, thus avoiding any notion of systemic, institutional or criminal responsibility, is right out of the CIA/DOD’s playbook,” Secker and Alford note.

Notably, it isn’t as if the military and CIA act in an official capacity as ‘censors’ — producers would be free to nullify their cooperative arrangements and receive no assistance — but that so many eagerly adopt government strictures and edits to see production completed indicates a power unfettered in Hollywood.

Glorification of war must be achieved with constant bombardment in advertising and the news to keep recruitment viable and service an appealing option — lest the Pentagon be unable to cull order-followers from freer thinkers among us.

Because, in fact, war isn’t glorious. It isn’t glamorous. It isn’t a series of epic battles between wholly honorable soldiers fighting coal-hearted villains at the behest of dictators whose only goal involves the crushing of spines.

War is ugly — impossibly complex, gruesome, duplicitous, savage at times — even from the sterility of a drone control room, the bombs fall on human beings, an interminable list of innocents killed by soldiers from every side fighting their various politicians’ wars can attest to its abhorrence.

War and spy games come to life on the big and little screens portray adventure, intrigue, drama, and suspense — but they are not real life — no matter how authentic the Pentagon affirms their details.