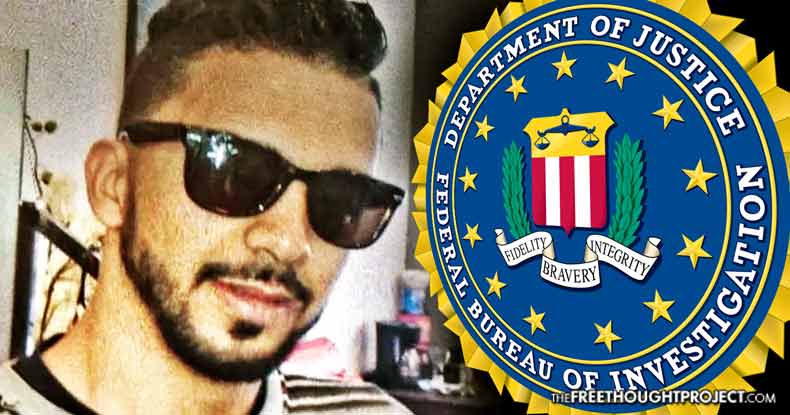 It’s become a near-weekly occurrence. Somewhere in some state, the FBI will announce that they’ve foiled yet another terrorist plot and saved lives. However, as the data shows, the majority of these cases involve psychologically diminished patsies who’ve been entirely groomed, armed, and entrapped by FBI agents. Simply put, the FBI manufactures terror threats and then takes credit for stopping them.

But what happens when they take it too far? What happens if the FBI actually tells someone to conduct a mass shooting? Well, in Milwaukee, WI, we are seeing this unfold first hand.

A little over two years ago, Samy Mohamed Hamzeh, 25, found himself in the midst of an FBI sting. Little did he know that he was being groomed for terrorism by the same government who claims to fight terrorism.

Hamzeh was born in the U.S. but lived much of his childhood in Jordan before moving to Milwaukee when he was 19. For four years, Hamzeh lived an entirely normal life, until one day he was contacted by people who wanted to radicalize him and give him weapons.

The group, entirely controlled by the FBI, was plotting to shoot up the Humphrey Scottish Rite Masonic Center during an event.

In February of 2016, the FBI announced they had foiled a terror plot by a man who was planning to kill at least 30 people to “defend Islam.” Americans cheered, and everyone felt safer — the FBI had saved us from extremists once again.

However, that’s not how things actually happened.

For months, two corrupt FBI informants goaded Hamzeh into obtaining weapons. According to his attorneys, hundreds of hours of recorded conversations show the FBI pressed Hamzeh into getting these weapons and eventually began pushing him to carry out a mass shooting.

Despite the intense peer pressure from people pretending that they were mass murderers, Hamzeh resisted. He didn’t even want the guns. Now, his attorneys have filed a motion to get him released on bond because they say he’s been set up.

The informants, the motion states, “frequently lobbied Hamzeh to get a machine gun despite his repeated protests that all he wanted was a legal handgun to protect himself.”

In spite of the FBI claiming Hamzeh was going to carry out a mass shooting — they were attempting to force him to do — the recordings, according to his attorneys, show he resisted and adamantly refused to ever participate in violence.

Even after the FBI announced their foiled terror plot, they were unable to charge Hamzeh with anything other than possessing a machine gun and a silencer. And even these items had been essentially shoved into his lap by the FBI.

As the Journal-Sentinel reports, a psychiatrist who evaluated Hamzeh in jail concluded he does not fit a profile of someone who would kill strangers and “has a strong moral code with a very prominent conscience and empathy.”

“There is also no evidence that Hamzeh ever made any plans or was doing anything other than making empty boasts to express his resentment about Israel or to gain attention,” reads their brief in support of the bond motion.

Hamzeh has now been in jail for a year and a half because the FBI tried to make him carry out a mass shooting that he didn’t want to do. And, he could be there much longer as each of the charges for the weapons — that he also did not want — carry 10 years a piece.

If Hamzeh never had any intention of carrying out a terror attack and the weapons were forced on him by the FBI, why on Earth would this be on the news and touted as some foiled plot?

Well, the answer to that is simple.

Former FBI assistant director Thomas Fuentes actually reveals the answer as he defends the tactics used by the FBI to set up poverty-stricken men by offering them large sums of money and weapons to commit crimes.

After he defended the FBI’s role in bribing poor, mentally diminished people to get them to commit crimes, he let out a bombshell statement, confirming what many of us already know.

There you have it. The FBI puts Americans in danger by grooming otherwise entirely innocent people into doing harm — so they can keep fear alive.

But what would’ve happened if Hamzeh would’ve actually carried out this shooting that the FBI was trying to force on him? Would the FBI still claim they had informants attempting to groom him? Would they admit to forcing him to accept weapons?