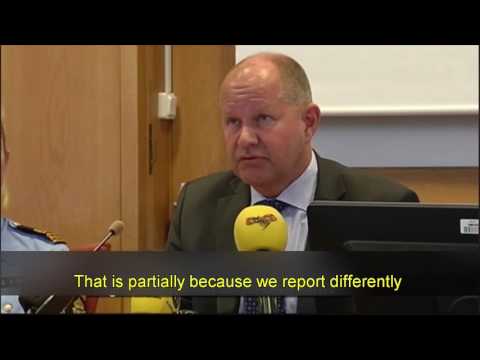 Michael Töpffer reports for the Swedish daily newspaper Expressen that more than a year ago, on February 10, 2016, during a panel discussion on terrorist threats at the Swedish Jurist Assembly in Stockholm, National Police Chief Dan Eliasson admitted that crime has become so severe that police could no longer guarantee safety in parts of Sweden, including in the capital Stockholm:

“I have been surprised after I became national police chief how bad it is in certain areas during the evenings. If we do not contain this development, I am completely convinced that not only traditional crime but also radicalization and terror will increase in our society…. No, I cannot guarantee the security is there. We have resources, we act, but I cannot guarantee security in these areas. It is difficult.”

Eliasson identified 14 radicalized areas where conditions are so bad that police have to deploy two patrol cars “when we enter” those areas “because otherwise the car is vandalized and it’s impossible to do the job and it is obviously incredibly worrying.”

A year later, the situation has worsened.

In June 2017 at a press conference, National Police Commissioner Eliasson pleaded for help:

“Help us, help us! We need the local councils with us. We must do more together to turn this crisis around. The number of at-risk areas has increased. In some areas, it has gotten worse.”

That same month, on June 21, 2017, Anders Holm Nielsen reports for Nyheder that the Swedish police, in a new report Exposed Areas 2017, said that 61 areas in Sweden are deemed “vulnerable” because they have major problems with crime, unemployment and distrust of authorities:

Repeating police chief Eliasson’s plea, Swedish police ask for help from other actors in local areas, saying that the deteriorating public security situation can not be improved without the help from parents, religious communities and voluntary organizations.

Reporting for Breitbart London on June 29, 2017, Chris Tomlinson writes that there are now 61 no-go zones in Sweden, many of which are heavily migrant-populated. Tynnered, a suburb in Gothenburg, is a new addition to the list after cases of car burnings and shootings. Eliasson warned if the trend persists and crime continues to increase, then the social contract could break down in Sweden.

To make matters even worse, although the Swedish interior ministry has promised to hire more police officers, many Swedish police departments are facing an exodus of officers, especially in no-go areas:

“Despite the fact the Swedish government refuses to keep statistics on the national origin of suspects, many in Sweden have suspected that migrants make up a large proportion of criminals. The suspicion was confirmed earlier this year when police officer Peter Springare wrote on Facebook that the vast majority of criminal cases that crossed his desk were committed by migrants.”

Researcher Johan Patrik Engellau believes the situation in Sweden may be far worse than even what government officials are willing to admit. In an article earlier this year, he wrote:

“I’m afraid it is the end for the well-organised, decent, and egalitarian Sweden we have known up to now. Personally, I would not be surprised if a form of civil war occurs. In some places, the civil war has probably already begun.“

“The fact remains that Sweden’s political elite is nowhere near taking such decisive action, as it has not even started to openly speak out about these problems.

Therefore Sweden will very soon need help from abroad. Police chief Dan Eliasson’s prayer for help only included potential partners inside Sweden, but very soon the international community will have to intervene if a humanitarian catastrophe is to be avoided.“