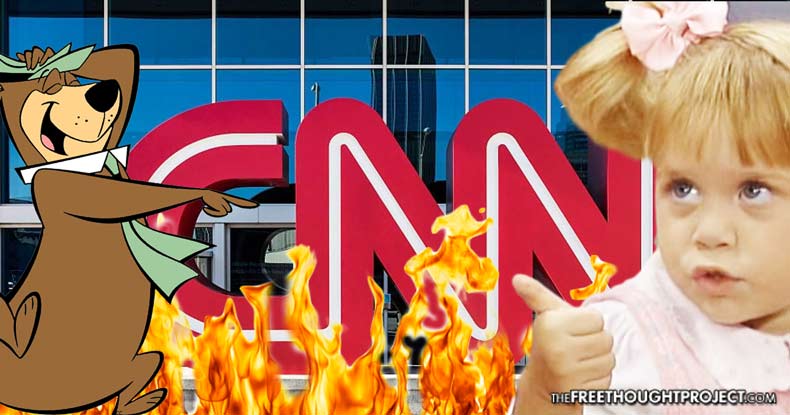 There’s a reason why TFTP does not cite CNN in most of our articles. Plainly stated, the Cable News Network is unreliable. And while the free-thinking great awakening continues to take place, Americans and many around the world have also taken notice. As a result, CNN’s ratings are tanking.

Some of us are old enough to remember when “cable” became a household word and was sought after above the often unreliable over-the-air broadcasts of the usual big three networks and local channels. In the 1980’s, Ted Turner’s Cable News Network (CNN) was revolutionary. Prior to its inception, the only day-long news broadcasts available were on AM/FM radios, followed by one hour of broadcast news starting at 6 pm on television.

There’s no question CNN pioneered 24-hour cable news, but somewhere along the way, the company not only lost its objectivity but became a shill for the establishment and a tool for divisive distraction.

Often criticized for being leftist leaning, in recent years, CNN has become known as the Clinton News Network by its critics. It was also one of the only networks with whom the Obama administration (including the president) would consult.

Obama once treated FoxNews as an unreliable fake news network, and refused to be interviewed by the network, along with many members of his administration. And, as TFTP has pointed out numerous times,FOX News has been busted multiple times pushing fake news. But let’s get back to CNN’s death spiral.

Take for instance Chris Cuomo’s warning in October to all Americans they would be committing a crime if they read Wikileaks’ publication of Democrat National Committee emails. He told viewers, “Remember, it’s illegal to possess these stolen documents.” Cuomo even attempted to steer viewers into only listening to CNN’s narrative on Wikileaks. He said, “It’s different for the media, so everything you learn about this (latest Wikileaks’ revelations) you’re learning from us.”

One thing’s for sure, Americans hate being told what to think, and they don’t take kindly to threats. Cuomo’s threat wasn’t received well by freethinkers, many of whom went straight to Wikileaks to see for themselves what CNN might have been hiding.

Apparently, CNN knew they had every reason to fear Wikileaks’ DNC database publication. After all, the DNC email data dump revealed CNN’s troubling collusion with the DNC against not only Democrat Bernie Sanders, but favored Hillary Rodham Clinton as well during a presidential election.

CNN has come under fire recently, not only for their negligence in reporting facts, but also for the focus of their news reporting. As The Federalist recently reported, CNN takes poetic license, apparently, with their quotations.

Not only did CNN misquote Abraham Lincoln and Benjamin Franklin, but they were the target of an investigative journalism sting operation led by the Veritas Project. Undercover VP reporters caught CNN producers claiming their news coverage of Russian meddling in the presidential election as “mostly bullshit“, driven by CNN executives who wanted to make a mountain out of a molehill so to speak.

More recently, the sitting president of the U.S., Donald Trump, has made it his mission to add fuel to the fire of CNN’s demise, openly calling their network “Fake News.”

Whether genuine or not, the Trump CNN battle has served as a highly effective distraction from US starting war in Syria, sponsoring terrorism, killing hundreds of civilians, and the military-industrial complex in general. While Trump claims they are his enemy, they’ve done nothing but help to cover up his war crimes in Syria and the fact that he is aiding the Saudis in murdering civilians in Yemen.

Just this week, at the G20 Summit, he again called them out for their shenanigans, not the least of which was the recent threatening of a GIF creator who depicted CNN getting body slammed by a professional wrestler with Trump’s visage.

It now appears that all of the lies and propaganda spewed out by the network have taken a toll on CNN’s ratings which is apparently now at an all time low. According to Zero Hedge, “CNN’s primetime shows (Anderson Cooper and Don Lemon) managed to draw about 6% fewer viewers than multi-decade old re-runs of “Yogi Bear,” “Full House,” and “Friends” which air in the same time slots on Nick-At-Nite.” One would be hard-pressed to find anyone born after 1980 who has ever heard of Yogi Bear! How CNN is hanging on is anyone’s guess at this point.

The Federalist describes how bad it has gotten for the once reliable CNN;

According to cable ratings from the week of June 26-July 2, CNN’s viewership of its primetime shows was ranked significantly lower than its competitors like Fox News and MSNBC, which place first and second respectively. Clocking in at No. 10 on the list, CNN fell behind HGTV, Nick At Nite, History Channel, and ESPN …

Nick at Nite! More Millennials are getting their programming from YouTube than Nick at Nite. In a time where scandals at FoxNews have seen the departure of its top performer (Bill O’Reilly), and the resignation of the third highest rated anchor (Megan Kelly), CNN could have capitalized, but instead it looks like CNN is capitulating; a victim of its own fake news stories, biased reporting, favoritism, and corruption.