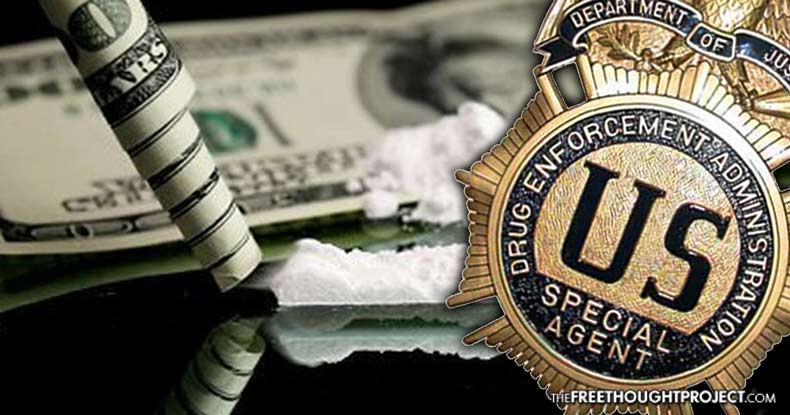 New Orleans, LA — For over a decade, agents with a New Orleans-based DEA task force sold drugs, intimidated informants and stole cash on the job with total impunity.

According to the Advocate, Chad Scott, the former leader of the task force has been fired in the midst of the investigation. It was reported that Scott and some of the officers working under him had a massive operation selling painkillers and that they would sometimes sell other drugs that they managed to steal from dealers during raids.

“There were a series of complaints that went back years. This is a guy who probably shouldn’t have been allowed to run his own task force,” an anonymous law enforcement official said.

The good news, in this case, is that a large and growing number of federal criminal drug cases are being reversed and nonviolent offenders are being set free due to the fact that this corruption has been exposed.

The FBI is now involved in the investigation and is reviewing the allegations against the officers. Many of the crimes that were committed by these officers happened so long ago that they can’t even be charged with them anymore, but their crime spree continued long into recent times so there is still a large amount of evidence against them.

DEA Special Agent Debbie Webber said in a statement that “DEA takes very seriously any allegations of wrongdoing or misconduct and holds our employees to the highest possible standards. Due to this being an ongoing investigation and with respect to all parties involved, the DEA cannot and will not comment on personnel matters or inquiries related to this investigation.”

The most disturbing thing about this case is that the DEA may have known about these crimes all along but allowed the officers to continue anyway.

The Advocate reported that four different whistleblowers within the DEA came forward to admit that they warned the DEA over a decade ago about this illegal activity. Unfortunately, their warnings were ignored and the guilty officers saw no consequences for their actions.

One anonymous whistleblower and former colleague of the members of the task force said that Scott could do pretty much whatever he wanted within the DEA.

“The DEA allowed it, if not promoted it,” the whistleblower said, going on to describe Scott as a “cowboy.” The officer also said that Scott was not alone and that a culture of corruption existed within the task force.

Last year, one of the whistleblowers even filed a lawsuit claiming that Scott protected informants who sold drugs and committed other crimes in exchange for tips that would help him get more arrests and improve his arrest numbers.

The veteran DEA agent said in the lawsuit that he faced repeated retaliation from superiors after telling them about what Scott was doing on the job. The Justice Department agreed to an out of court settlement worth $200,000.

Scott’s informants also came forward to investigators with stories of his corruption. According to one informant, Scott forced him to sell 100 pounds of marijuana and two kilos of cocaine. In an interview with investigators, the informant said that Scott told him that he would be arrested if he did not sell the drugs.

The informant “stated that he was only doing as instructed by the ‘authorities’ because he feared for the safety of his family,” according to DEA documents.

These officers were essentially running their own cartels — granted to them by the DEA.

Adding to the growing pile of evidence, Johnny Domingue, another former member of the task force, was arrested and pled guilty, admitting to using his position to “to acquire quantities of cocaine hydrochloride and other Schedule II controlled dangerous substances, marijuana, methamphetamine, other prescription pills, cash from the sale of these drugs and cash seized from individuals who were arrested or ‘shaken down’ while acting under the color of law enforcement.”

Domingue even admitted to stealing over 300 grams of cocaine from the evidence locker at the DEA’s New Orleans Field Division.

Domingue said that when he joined the task force this type of activity was already extremely common.

Douglas Bruce, an investigator with the Justice Department, testified in court that when he interviewed Domingue, he was told that corruption “was a practice that was already in place when he came on board, and he inserted himself sort of in that circle.”

This case is hardly isolated as this scenario is but a broken record of corruption, playing over and over again in departments across the country.

John Vibes is an author and researcher who organizes a number of large events including the Free Your Mind Conference. He also has a publishing company where he offers a censorship free platform for both fiction and non-fiction writers. You can contact him and stay connected to his work at his Facebook page.John is currently battling cancer naturally, without any chemo or radiation, and will be working to help others through his experience, if you wish to contribute to his treatments please donate here.