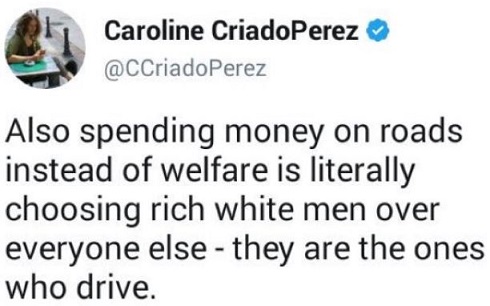 Caroline Criado-Perez is a Brazilian-born British feminist activist and journalist, a member of the Tribe, and heaped with honors:

This is a recent tweet posted by Criado-Perez (retweeted by InfoWars reporters Paul Joseph Watson):

“Also spending money on roads instead of welfare is literally choosing rich white men over everyone else — they are the ones who drive.”

Bet you didn’t know that only rich white men drive.