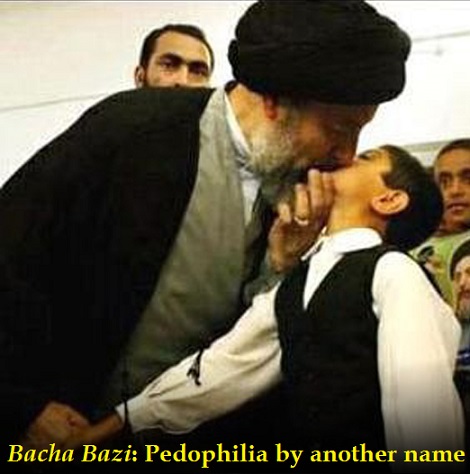 Homosexuality is abjured and supposedly illegal in Muslim countries, but a form of homosexuality called bacha bazi is a common “cultural” practice, which, of course, points to their hypocrisy.

But bacha bazi isn’t just a homosexual practice, it is pederasty (sex between an adult male and an adolescent boy) and outright pedophilia, when the boys are prepubescent. Even worse, bacha bazi is really a form of boy-prostitution and often coerced.

Bacha bazi is a form of pederasty which has been prevalent in Central Asia since antiquity…. Visiting Turkestan in 1872 to 1873, Eugene Schuyler observed that, “here boys and youths specially trained take the place of the dancing-girls of other countries….” [T]he dances “were by no means indecent, though they were often very lascivious.” …

Bacha bāzī (…literally “boy play”…) is a slang term in Afghanistan for a wide variety of activities involving sexual relations between older men and younger adolescent men, or boys, that sometimes includes child sexual abuse. The practitioner is commonly called bacha Baz (meaning “pedophile” in Dari)…. It may include to some extent child pornography, sexual slavery, and child prostitution in which prepubescent boys are sold to wealthy or powerful men for entertainment and sexual activities. Bacha bazi…is currently reported in various parts of Afghanistan. Force and coercion are common, and security officials state they are unable to end such practices because many of the men involved in bacha bazi-related activities are powerful and well-armed warlords…

A controversy arose after allegations surfaced that US government forces in Afghanistan…deliberately ignored bacha bazi. The US military justified this by claiming the abuse was largely the responsibility of the “local Afghan government.”

Do you still wonder why the Left in America and the West have made a tacit alliance with Islam?