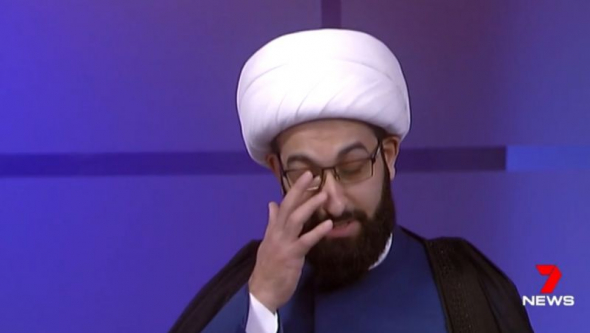 Mohammed Tawhidi is a famous Australian Imam who is loved and hated by Muslims for his preaching against terrorism. Recently while he was being interviewed on national television he had a breakdown and admitted that Muslims commit terrorism because terrorism is a part of the religion:

An imam in Australia broke down in tears during a national TV interview where he discussed the brainwashing of a doctor who joined the Islamic State terror group and said Islam is to blame for such radicalization.

“I can’t blame him, it’s my religion. I can’t blame it on education, because he’s had the best education. So I have to blame it on religion,” Mohammed Tawhidi said, while talking about Tareq Kamleh, who fled to Syria in 2015 to join the jihadists.

Yahoo 7 reported Wednesday that Kamleh has appeared in a video celebrating his conversion as a jihadist and declared that IS fighters “love death more than you love life.”

Kamleh also claimed that Muslims who refuse to join IS have “no self respect.”

Tawhidi admitted that the video will not go unnoticed, and said there are like-minded people in Australia who are also in danger of being radicalized.

There have been numerous reports of police cracking down on terror cells in Australia, and Tawhidi insisted that the nation will fight back against extremist influences.

“This is a battle that we Australians are going to win,” the imam declared.

“All that we’re dealing with is a bunch of determined amateurs that we can easily take control of.”

His calls for peace have made him a target for hardliners, however, and he said in April that a $5,000 bounty had been placed on his head.

A Daily Mail Australia article also reported Wednesday that Tawhidi, who has denounced Sharia law and called for hardline Islamic schools in Australia to be shut down, has asked for $30,000 to pay for security guards to protect him.

“I’ve been assaulted by Muslim leaders, ambushed and spat on in the streets,” Tawhidi said.

He previously sparked controversy for suggesting that he moved to Australia because it was a “non-Muslim country.”

“If we knew after 30 years we are going to have burqas running around and mosques being erected on every corner and people proposing Sharia law against democracy in this country … we wouldn’t have come,” he said earlier this year.

Explaining the cost for his security, he said: “I need security iron grilles installed on my home windows which will cost around $10,000. … I am looking to install a heavy duty fence around my property that will prevent any radicals from entering.”

Tawhidi has vowed to continue preaching a message of peace and “anti-radicalization” despite the threats on his life.

‘”This is a campaign to keep me alive for as long as possible and to prevent any more attacks or threats directed at me,” he said. (source)

There are many Muslims who are Muslim because they were born into it. Many are decent people who try to live normal lives and who believe Islam is true but do not know what to do with the violence inherent to it. Since the law of God is written in the hearts of all men, those Muslims who care about God and want truth struggle with their conscience and their religion says to them, wanting to be obedient to what they were taught is truth but knowing that something is not right.

This is the reason why Christians have a moral responsibility to pray and make sacrifice for Muslims like him, who know that something is wrong but have not yet come to the full realization that the Christ they were taught to hate all their lives is the one who is stirring their consciences, asking them to come to Him to find true submission to the will of God. It has been this way throughout history, where the enemies of the cross eventually becomes faithful followers.