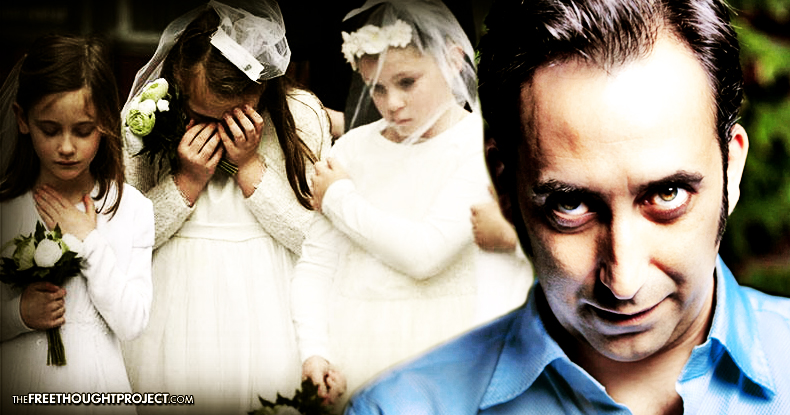 Girls as young as ten are among more than 200,000 children wed to adults in the United States in just the past 15 years, as — despite minimum requirements a person reach the age of 18, or legal adulthood, nationally — a smattering of locations have preserved loopholes legally permitting child marriage.

Alarmingly, the number of children married away to fully mature adults could be much higher than the already-startling number — ten states provide only fragmentary statistics, or none at all.

And the loopholes don’t exist solely in theory — adults across the U.S. have actively opportuned the law to marry kids — even amid a decline in the number of marriages, overall.

To wit, three 10-year-old girls and an 11-year-old boy were among the hundreds of thousands of children and minors the system somehow permitted adults to lock into marriage — despite their bodies and mindsnot yet being fully developed.

“At least 207,468 minors married in the US between 2000 and 2015, according to data compiled by Unchained At Last, a group campaigning to abolish child marriage, and investigative documentary series Frontline,” The Independent reports.

Exemptions from the national marriage minimum age of 18 exist for circumstances like pregnancy and parental consent — in every state in the country.

However, record-keeping remains inconsistent across the country, and details regarding the nature of child marriages — if unintended pregnancy made the union tenable, for instance — usually aren’t included.

Indeed, New Jersey Governor Chris Christie — citing conditions such as religious customs — bore the brunt of furious criticism recently for refusing to sign into law restrictions barring children under the age of 18 from tying the knot or entering a civil unions.

“I agree that protecting the wellbeing, dignity, and freedom of minors is vital,” Christie placated an irate populace, upon refusing to codify the law in early May, “but the severe bar this bill creates is not necessary to address the concerns voiced by the bill’s proponents and does not comport with the sensibilities and, in some cases, the religious customs, of the people of this State.”

Unchained At Last Founder and Executive Director Fraidy Reiss — herself, an albeit older victim of forced marriage — told Frontline that, upon first obtaining child marriage statistics for New Jersey, where her organization is based,

“I got that spreadsheet from the state health department, I was literally shaking.”

“That number was so much higher than I had thought it would be,” Reiss told the PBS program. “Then, the fact that the children were as young as 13 and the fact that it was mostly girls married to adult men.”

Across the U.S., insufficient data still show the number of marriages involving minors and children dropped by 61 percent in the decade between 2000 and 2010 — but even that figure could be wildly inaccurate without further information readily available.

Lest doubt take root, these figures haven’t been bloated by an excess of youth permitted to marry other youth — fully 86 percent of marriages analyzed with available data involved adults wedding kids under 18.

“Children as young as 12 were granted marriage licenses in Alaska, Louisiana, South Carolina, and Tennessee.

Around the United States, adults — as old as the 74-year-old Alabama man, whose bride was six decades his junior — ostensibly committed to lifetime relationships with three 10-year-olds, two 11-year-olds, ten 12-year-olds, fifty-one 13-year-olds, and 985 children aged 14.

Of course, individual states’ legal loopholes don’t necessarily jibe with federal mandates pertaining to marriageable age — not to mention the gross breach of social mores and protections for children.

Frontline suggests this odd and astonishing discrepancy — if not outright hypocrisy — leaves cavernous gaps in consistency of law:

“Most states set the age of sexual consent between 16 and 18. A person can be charged with sexual abuse or statutory rape for having sex with a minor. Yet, we found numerous examples of children who were given marriage licenses before they could legally consent to sex. These marriages were almost always approved by court clerks and judges.”

Advocates working to close gaping loopholes caution that age cannot necessarily be the primary indicator of a distressing betrothal.

“A large age difference is an automatic red flag, but a small age difference is not an automatic green flag,” attorney Jeanne Smoot, of the Tahirih Justice Center, which works to eradicate all marriages involving minors, told Frontline, adding authorities rarely pursue charges against adults in marriages to kids, as “the same acts that would be statutory rape outside of marriage are made lawful within.”

Most states allowing adults to take a child spouse require the consent of one or both parents, permission from a judge, or some combination thereof — however, there is a rather astonishing footnote to this underbelly of marriage and child love in the United States.

“In 26 states, there’s no minimum marriage age, according to the Tahirih Justice Center. Children in those states can get married at any age if certain conditions are met.”