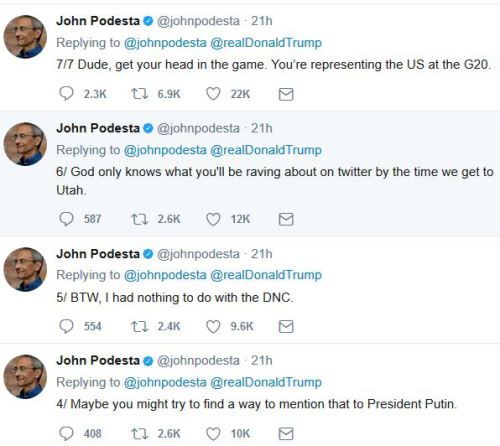 By now, sensible people should know that, despite the Left’s portrayal of him as an out-of-control whack job, President Trump actually is an eminently sane and deliberate man who says what he means, and means what he says, and is true to his word. See:

Not only does he know what he’s doing, he thinks several moves ahead of his opponents, and has been described by some of his admirers as adept in playing not just 3D-, but 4D-chess.

He is also a man who requires minimal sleep, of only about 4 hours a night.

So it should be of some interest that while he was at the G20 Summit in Hamburg, Germany, in the wee hours of July 7, President Trump took a few minutes to needle John Podesta in a tweet:

Everyone here is talking about why John Podesta refused to give the DNC server to the FBI and the CIA. Disgraceful!

This is the John Podesta who was chair of Hillary Clinton’s failed presidential campaign, Obama’s White House advisor, and Bill Clinton’s White House chief of staff. The John Podesta of all those “pizza” pedophile code-words emails, that cannibalism painting, and the occultic/satanic “spirit cooking,” to whom Congress curiously gave the privilege of testifying before a closed-door hearing on June 27, 2017.

Podesta got so unnerved by President Trump’s July 7 tweet that, even though he’s on a cross-country road trip with his wife, he posted 6 successive tweets in response, as well as an op/ed in Washington Post, demanding to know why President Trump is tweeting about him:

The timing of President Trump’s tweet is interesting, a day after German prosecutors, on July 6, announced the arrest of thousands of pedophiles, including unnamed high-level politicians, in Operation Elysium — a huge sting of a global pedophile network of more than 87,000 members on the dark web. According to YourNewsWire, the sting threw the G20 Summit into disarray when German police detained key members of at least two European delegations. (Read more about Operation Elysium here.)

To unnerve John Podesta even more, President Trump should re-tweet his tweet of October 8, 2012, declaring that pedophiles should be put to death after a “fast trial”. LOL